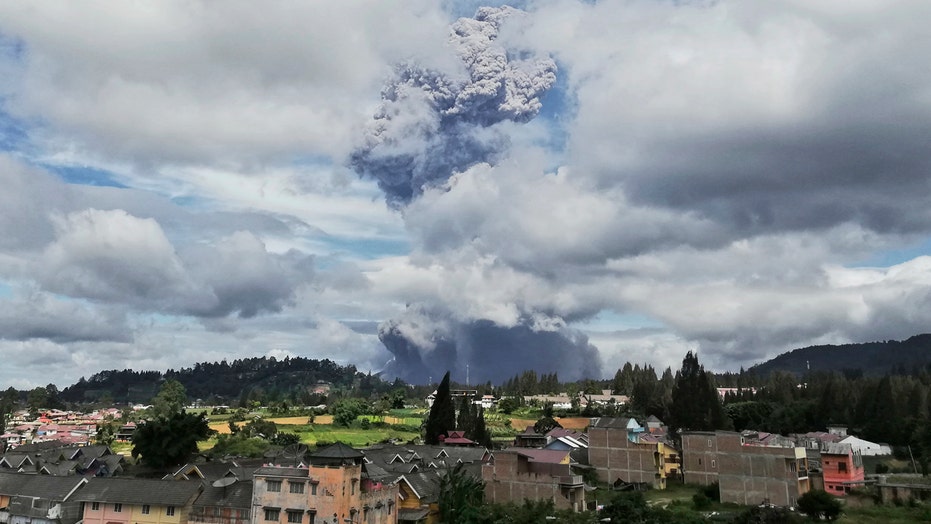 The Pacific’s “Ring of Fire” is a breeding ground for natural disasters. Here’s a look at the most recent incidents.

A rumbling volcano in Indonesia erupted Monday, sending a towering column of ash more than 3 miles into the sky and raining down on nearby villages.

Mount Sinabung, located on Indonesia's Sumatra Island, has been active since 2010 and had a spike in activity in recent days, including a pair of smaller eruptions over the weekend.

Indonesia’s Volcanology and Geological Hazard Mitigation Center said there were no reports of deaths or injuries from the eruption but that lava flows were possible.

"People living nearby are advised to be on alert for the potential appearance of lava," the agency said.

THE 'RING OF FIRE' EXPLAINED

Residents in nearby villages were advised to stay at least 3.1 miles from the crater's mouth.

An area around the volcano has been barricaded off for years, but nearby communities were covered in thick ash Monday after the volcano sent a column of volcanic ash up to 16,400 feet into the sky.

Falling grit and ash accumulated up to 2 inches in already abandoned villages on the volcano's slopes, Armen Putra, an official at the Sinabung monitoring post on Sumatra Island, told the Associated Press.

A car drives on a road covered with volcanic ash from the eruption of Mount Sinabung, in Karo, North Sumatra, Indonesia, Monday, Aug. 10, 2020. (AP Photo/Sugeng Nuryono)

In Berastagi, a tourist destination city in North Sumatra province, about 12.4 miles from the crater, motorists switched on headlights in daylight to see through the ash.

Indonesia's Transport Ministry said that air travel was not being impacted so far by the ash.

Some 30,000 people have been forced to leave homes around Sinabung in the past few years.

The volcano, one of two currently erupting in Indonesia, was dormant for four centuries before exploding in 2010, killing two people.

Sinabung is among more than 120 active volcanoes in Indonesia, which is prone to seismic upheaval due to its location on the Pacific “Ring of Fire,” an arc of volcanoes and fault lines encircling the Pacific Basin.