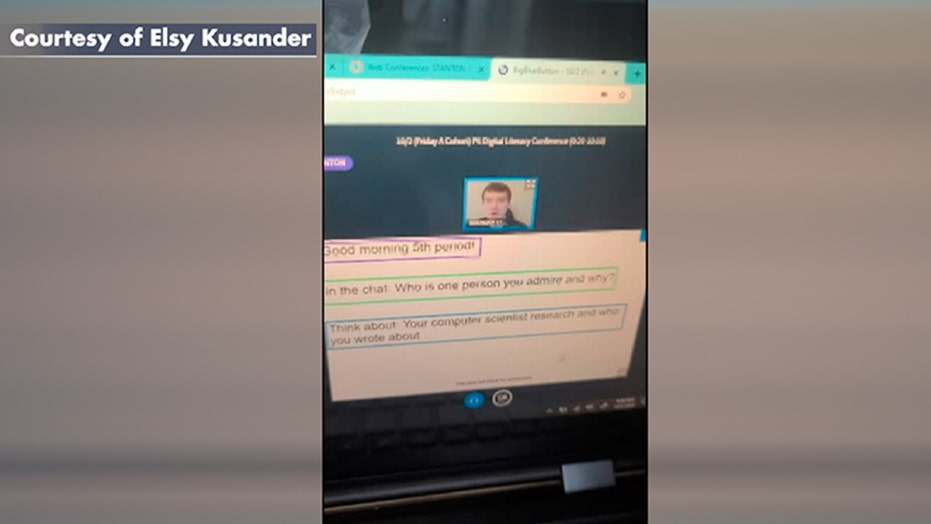 A Seattle-area middle school teacher scolded his 10-year-old student and briefly kicked him out of a virtual classroom for admiring President Trump.

A Seattle-area middle school teacher scolded a 10-year-old student and briefly kicked him out of his virtual classroom last week after the child said he admires President Trump, his mother said.

Brendan Stanton, a sixth-grade teacher at Perry G. Keithley Middle School in Tacoma, asked his students on Friday to name a person they admire and to state why. Students were supposed to type their answers in a chat room.

"I admire Donald J. Trump because he is making America great again," the child wrote, according to the "The Jason Rantz Show." "And because he is the best president the United States of America could ever, ever have. And he built the wall so terrorists couldn’t come into in the U.S. Trump is the best person in the world. And that’s why I had admire him."

Stanton reportedly booted the child from the chat and proceeded to berate Trump without saying his name. The child's mother, Elsy Kusander, told Fox News she overheard Stanton and recorded his remarks.

"The example that was shared in the chat, which I went ahead and erased for us, was not appropriate right?” Stanton told the class. “Especially as that individual has created so much division and hatred between people and specifically spoken hatred to many different individuals, OK?"

He referred to Trump as an "individual"  who "has spoken hate to many individuals and I don’t think is an appropriate example for a role model that we should be admiring.”

"No matter what party of what side of politics you're on, you have to respect the office of the president, Kusander told Fox News.

She said Stanton spoke over with her over the phone to discuss the matter. The mom said she didn't make him aware that she recorded his earlier classroom rant. She said she made him aware their phone conversation was being recorded.

Stanton claimed Trump wasn't an appropriate answer because he asked the students to name a computer programmer they admired. The students could also name someone in their community if they could not think of a programmer.

"He told me Trump was not part of the topic," Kusander said. "But I told him, 'OK, but the question you asked was more general and wasn't specific about computer science.'"

Stanton also told Kusander that another student was offended by her son's answer and that he deleted the question because of privacy concerns, the mother said. The classes are normally recorded and posted to an online portal for students and parents.

“My perspective has nothing to do with Donald Trump himself, right? I try to keep politics out of the classroom," he said, according to a recording of their conversation. “I do try to keep politics out of the classroom… because students have different opinions, right? And so if the way that I said it was not perfect, I do apologize. What I was trying to say is just ‘Hey, hey, guys, let’s get it back to our topic of the day because we really need to get moving into our content, which was on our computer scientists.’”

He noted her son's comments about Trump's much-promised border wall.

"But we know that our neighbors at the southern border are not all terrorists, right?” he said.

Kusander, who is from Honduras, said the wall doesn't bother her.

When Kusander told Stanton she witnessed and recorded his remarks during the classroom instruction, she said he apologized for the incident and offered to apologize to her son.

“I do apologize if my words were not perfect at the time,” he told her. “If I used … if I said that Trump was ‘hateful and divisive,’ that may have been what I used at the time, but my purpose was in bringing us back to the conversation of computer scientists and the positive role that they’ve played in our history.”

"I don't have anything personal against him [Stanton.  I just want my kid to understand that people can have different opinions but that doesn't mean we always fight but we have to stand up for what we believe," she said.