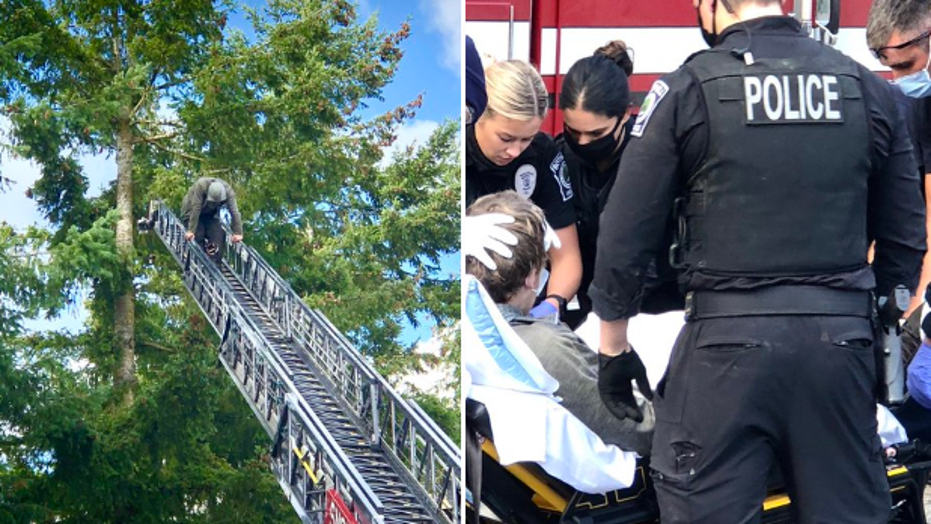 A motorcyclist in Washington state was arrested Wednesday after fleeing from a crash scene, carjacking another vehicle and climbing a tree in an apparent attempt to elude capture, according to authorities.

Police in Bothell, near Seattle, said the unidentified suspect, 32, was taken into custody following a roughly three-hour standoff that saw officers try to talk him down from the tree. He was later transported to a hospital for an unspecified injury suffered prior to the climb.

"Subject has come down from the tree and has been taken into custody," Bothell police wrote on Twitter.

The situation began when police received reports of a motorcycle crashing into a barrier and another vehicle on Interstate 405 in Bothell, Q13 FOX of Seattle reported.

The suspect fled the scene then carjacked a small white car from a nearby parking lot, police said.

A gun owner who witnessed the carjacking reportedly fired one round at the vehicle’s tires in an attempt to disable the vehicle as it was leaving the area, reports said.

A carjacking suspect was transported to a local area hospital for an injury suffered prior to climbing the tree. (Bothell Police)

Authorities followed the car before calling off the pursuit due to safety reasons related to the suspect's erratic driving, Heather Axtman of the Washington State Patrol told Seattle's KOMO-TV.

The suspect then drove north on State Route 527 before abandoning the vehicle and climbing a nearby tree.

Police eventually spotted the car, found the suspect in the tree, then spent roughly three hours trying to convince him to climb down, police said.