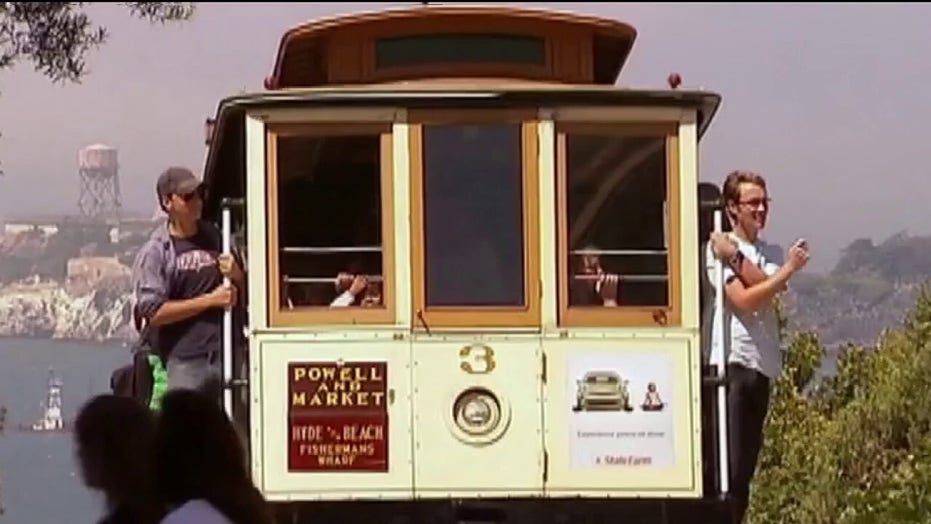 SAN FRANCISCO – Fed up with white people calling 911 about people of color selling water bottles, barbecuing or otherwise going about with life, San Francisco supervisors are set to approve new hate crime legislation giving the targets of those calls the ability to sue the caller.

The San Francisco Board of Supervisors will vote Tuesday on the Caution Against Racial and Exploitative Non-Emergencies Act, also known as the CAREN legislation. The name is a nod to a widespread meme using the name "Karen" to describe a specific type of white, middle-aged woman, who exhibits behaviors that stem from privilege, such as using the police to target people of color.

All 11 supervisors have signed on to the legislation, guaranteeing its passage, despite criticism by some that the name is sexist and unnecessarily divisive.

In San Francisco, a white couple was criticized on social media after video was widely shared of their questioning a Filipino American stenciling "Black Lives Matter" in front of his own home in June. They later called police.

FILE - In this June 14, 2020, file photo, James Juanillo poses outside of his home in San Francisco.  (AP Photo/Jeff Chiu, File)

James Juanillo said he deliberately chose yellow chalk to match the color of the house, and centered the stencil just so to be framed by the picture box window. Then a couple approached him, repeatedly demanding to know if this was his home because he was defacing private property.

"They tried to cast it as a criminal scene," he said. "It was me calmly applying chalk, not spray paint, not in the middle of the night but very deliberately. The only thing that was missing was a pinot grigio."

Juanillo said he hopes the legislation will caution people in the future against turning to 911.

Shamann Walton, the supervisor who introduced the legislation said, "911 calls and emergency reports are not customer service lines for racist behavior.

"People of color have the right to do everyday activities and should not be subject to being harassed due to someone's racial bias."

Walton, who is Black, reeled off examples where minorities have suffered from bogus claims, including Emmitt Till, a Black teenager beaten to death in 1955 after accusations by a white woman who later admitted to lying.

It is crushing to be confronted by police, say supporters of the legislation, because someone saw you as a threat, possibly criminal or as not belonging. It's especially terrifying for Black people for whom encounters with police could end in violence.

"This is not hyperbole," said Brittni Chicuata, chief of staff at the city's Human Rights Commission. "This is an established pattern reflected in the disparate treatment of Black people and other people of color in our city and in our country."

In May, Amy Cooper, a white woman, called 911 from Manhattan's Central Park, frantically and falsely claiming that an African American man -- who had politely asked her to leash her dog -- was threatening her.

She has been charged with filing a false police report, and the incident also inspired New York state lawmakers in June to pass a law that makes it easier under civil rights law to sue an individual who calls a police officer on someone "without reason" because of their background, including race and national origin.

The San Francisco legislation gives people the right to sue the caller in civil court and supporters hope this will make some 911-callers think twice before turning to police. The discrimination need not be race based; it can also be due to the person's sex, age, religion, disability, gender identity, weight, or height.

The board received written complaints from eight people -- several named with a spelling variant of Karen -- who support the legislation but object to its name, which they say is sexist and ageist and should be avoided.

Vic Vicari wrote that the insensitive use of the name "as a general purpose term of disapproval for middle age white women needs to stop." Carynn Silva, saying that she loves the name her mom gave her, called it a racist term against white women. And Caren Batides asked if the supervisor would want his name mocked.

Karen Shane poses for photos in Belmont, Calif., Monday, Oct. 19, 2020. Fed up with white people calling 911 about people of color selling water bottles, barbecuing or otherwise going about with life, San Francisco Board of Supervisors will vote Tuesday, Oct. 20, 2020, on the Caution Against Racial and Exploitative Non-Emergencies Act, also known as the CAREN legislation, a nod to a widespread meme using the name "Karen" to describe a specific type of white, middle-aged woman, who exhibits behaviors that stem from privilege such as using the police to target people of color. (AP Photo/Jeff Chiu)

"Yes, I am named Karen, and I do speak up for injustices on a regular occasion," wrote Karen Shane. "So could we attempt at coming up with some other acronym that doesn't vilify a whole group of people named Karen/Caryn/Caren?"

Reached by phone, Shane, who lives in a San Francisco Bay Area suburb and describes herself as a middle-aged white woman, readily pokes fun of her first name and said she's aware that even complaining about it is something that a "Karen" would do, but she feels the supervisor didn't need to cheapen what she agrees is important legislation.

It's as if he "opened the thesaurus and picked some words that would spell the name, when in fact it should be misuse of 911 or racial misuse of 911," she said. "By using the name CAREN, he's just perpetuating a racial divide. Granted it's not a protected class, but it's somebody's name."

Walton has dismissed the concerns, saying the legislation does not refer to an individual, male or female.