Groups of protesters began arriving in Austin, Texas, on Saturday evening amid warnings to the public from local police about potential trouble as the night progresses.

Residents of several apartment complexes near police department headquarters had received letters from property managers, warning that “armed” protesters may try to access the buildings to get a better view of the protests below, FOX 7 of Austin reported.

TEXAS MAN SAID TO BE ARMED IS SHOT, KILLED AFTER APPROACHING DRIVER AT AUSTIN PROTEST: WITNESSES

"Keep your eyes open for anyone that might be on the roof or upper balconies," one warning letter said.

More than 100  Austin police officers – many of them in riot gear, or riding horses or bicycles – were deployed in the capital city of Texas in a bid to minimize rioting and vandalism, the Austin American Statesman reported.

Officers from the Texas Department of Public Safety also were deployed, the Statesman reported.

By midnight Sunday local time, protest organizers claimed, police had arrested or detained at least 20 people, according to the newspaper. But police would not immediately confirm the number, adding more information would be available Sunday or Monday.

Messages posted on social media suggested that demonstrators planned to set up an “autonomous zone” in Austin – similar to the “CHOP” area that was set up in Seattle this summer – but those claims could not be immediately confirmed.

At one point Saturday evening, police pepper-sprayed unruly protesters near a memorial to a protester who was fatally shot last week. Things quieted down around 10:30 p.m. but then some protesters staged a demonstration outside police headquarters around 11 p.m., the Statesman reported

Earlier in the evening, a crowd marched from the University of Texas campus toward the home of Austin City Councilmember Kathie Tovo – to call on her to help slash the city’s police budget by $100 million.

Tovo had posted on Facebook on Friday that she stands “in solidarity with community members calling for change.”

She had previously called for no cuts to the police budget, FOX 7 reported.

Previous unrest in Austin on July 25 led to the shooting death of a 28-year-old protester named Garrett Foster, who authorities said died from multiple gunshot wounds. 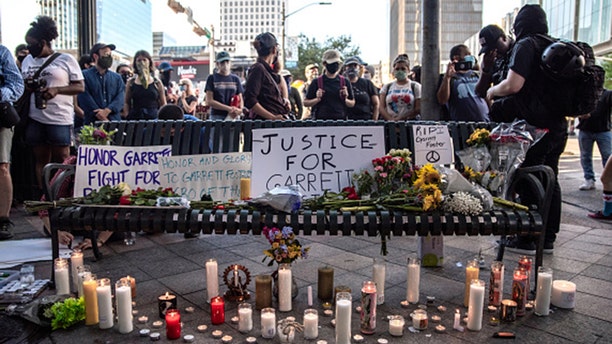 People gather around a makeshift memorial lined with flowers and candle at a vigil for Garrett Foster on July 26, 2020 in downtown Austin, Texas. (Getty Images)

The gunman who shot Foster was later identified by his lawyers as Daniel Perry, a U.S. Army sergeant, the Texas Tribune reported.

After an investigation, Austin police said they released an unidentified person from custody, after the suspect claimed he fired at Foster in self-defense because Foster was pointing a weapon at him.

“Sgt. Perry is devastated by what happened,” attorney Clint Broden, representing Perry, said in a statement, according to The Associated Press.

U.S. Army officials confirmed that Perry was on active duty, assigned to the 1st Cavalry Division at Fort Hood in Texas.

Austin police continue to investigate Foster’s death and would neither confirm nor deny that Perry was the person they questioned in connection with the shooting, the AP reported.