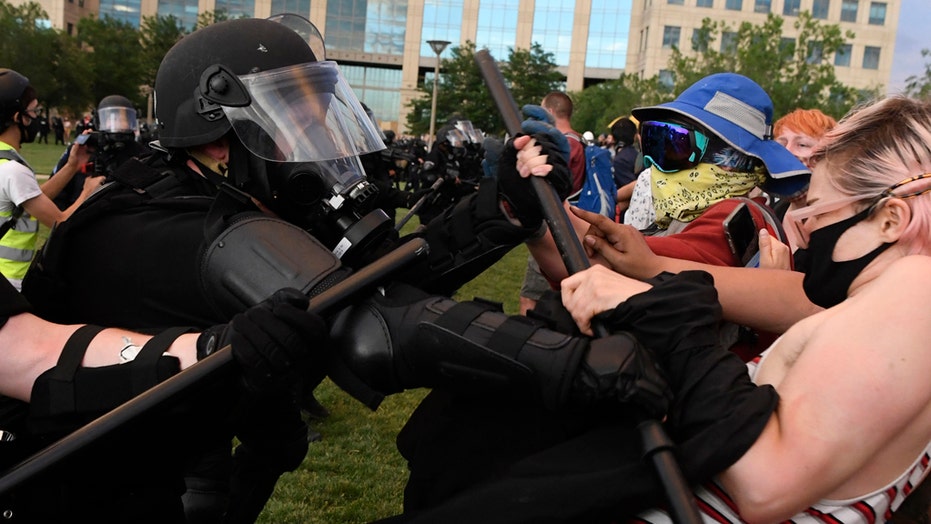 Aurora police in Colorado are facing criticism for using pepper spray and smoke grenades on people protesting the death of Elijah McClain, a 23-year-old Black man put into a chokehold by police last year, according to a report.

Police officials said officers used the chemical weapons Saturday on protesters who threw water bottles at officers and armed themselves with sticks and rocks, KUSA-TV reported.

Aurora police officers clash with protesters with batons during the Elijah McClain protest at the Aurora Municipal Center on June 27, 2020. (Photo by Andy Cross/MediaNews Group/The Denver Post via Getty Images)

Fox 31 Denver reported that the protest remained peaceful throughout the day but in the evening clashes broke out between protesters and police.

Around 9:30 p.m., Aurora police said the protests had calmed down, the station reported.

There were two arrests for failing to obey police orders, a misdemeanor, the station reported.

“If you’re not upset by what happened in Aurora than you’re not paying attention,” Colorado state Rep. Leslie Herod, D, told KUSA. Herod sponsored a recent police reform bill that was enacted into law, spelling out when police can use pepper spray and other devices to quell protests.

Herod called on Aurora Mayor Mike Coffman to address the use of pepper spray by police at Saturday’s protest, the station reported.

In a tweet Sunday, Coffman thanked police brass for “making sure that the protest today did not get out of control so that those who wanted to peacefully protest were allowed to do so.”

The Denver Post reported that not long after police deployed the pepper spray, a group of eight violinists gathered in a circle and played soft melodies. People slowly walked over, leaving behind police in riot gear.

Police put McClain in a chokehold during a confrontation Aug. 24.

McClain suffered a cardiac arrest on the way to the hospital and was later declared brain dead. He was taken off life support less than a week later.