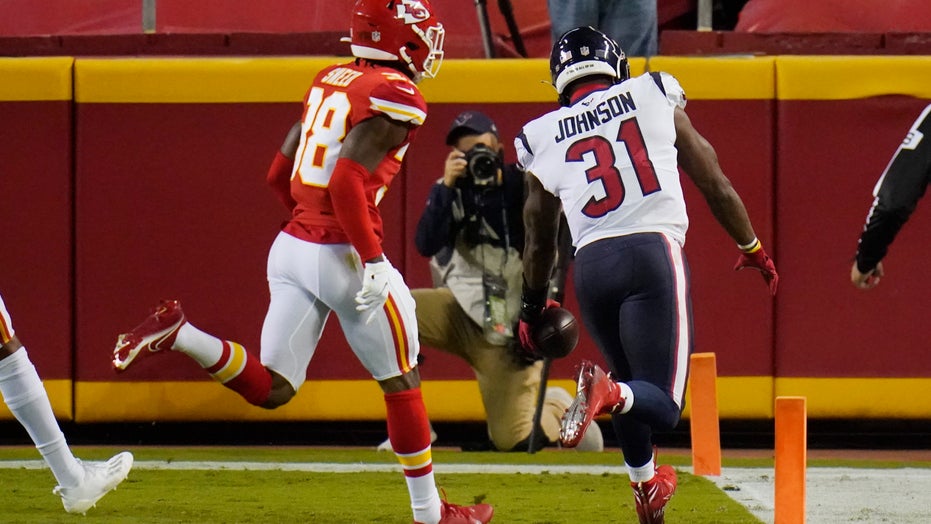 Houston Texans running back David Johnson was an afterthought in the trade involving All-Pro wide receiver DeAndre Hopkins to the Arizona Cardinals earlier in the offseason.

But on the opening night of the NFL season, Johnson immediately made his presence felt for his new team.

With 5:02 to go in the first quarter, Johnson received a handoff from quarterback Deshaun Watson, made one move to the right, and scampered for 19 yards and into the endzone for the first touchdown of the year. At that point in the game, Johnson had three carries for 33 yards and the score.

After an injury-riddled year in his final season with the Cardinals, Johnson will look for a rejuvenation in his first season with Houston. He only had 94 rushing attempts for 345 receiving yards and two rushing scores in 13 games last year.

The Texans held a 7-0 lead over the Chiefs at the end of the first quarter, but the home team answering on the ensuing drive. Chiefs quarterback Patrick Mahomes engineered an 11-play, 75-yard drive, that was capped with a 6-yard touchdown strike to All-Pro tight end Travis Kelce.

The Chiefs were on the field for the national anthem and the rendition of “Lift Every Voice and Sing” prior to the start of their game.

Before the coin toss, both teams had a moment of unity at midfield.

The demonstrations were a part of the league’s effort to promote social justice issues. The league had painted “End Racism” in the end zone.

Players chose to have other messages during their pregame workouts. “It Takes All of Us” and “BLM” were among the phrases seen on the field.

Players who opt to wear the decal will be given a list of names or they can choose a “victim of systematic racism who is not on that list,” NFL executive Anna Isaacson told teams in July, according to the NFL Network.

"As we continue to amplify and elevate the NFL's ongoing and long-term commitment to social justice, we will be incorporating several prominent elements on the field, into all broadcasts and across league and club platforms to begin the NFL season and beyond,” the memo reportedly read. “In developing these concepts, we have worked directly with players and received input from the NFLPA.”