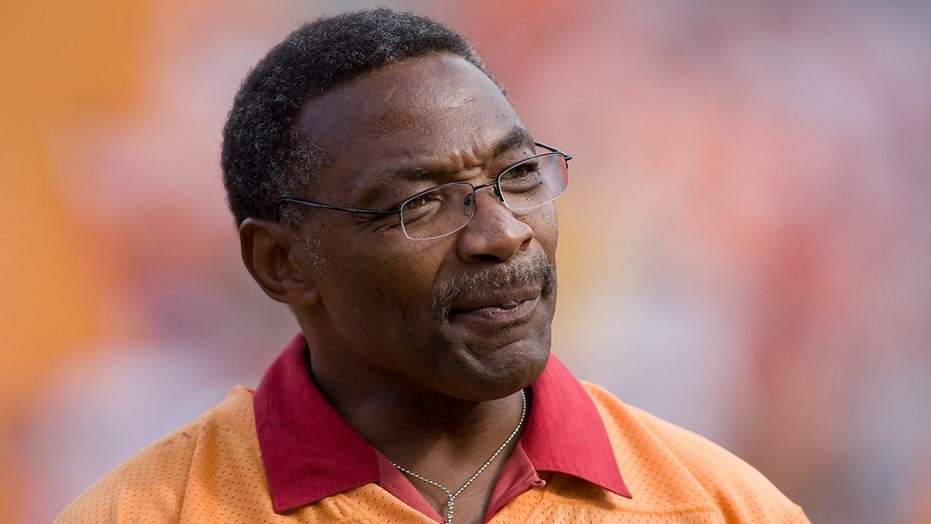 Says he was wrong to oppose players kneeling.

The Tampa Bay Buccaneers franchise has had some success in the NFL since entering the league in 1976 and it has at least one Super Bowl – more than some of the longer-existing teams.

Tampa Bay has produced great players who made a big impact on the team. But who gets weeded out when it comes to the top four players in its history?

Read below for a list of the Buccaneers’ Mount Rushmore.

Derrick Brooks is one of the best linebackers to play in last few decades. (The Associated Press)

Derrick Brooks was one of the best linebackers to come through the Buccaneers’ organization.

He was a Pro Bowler 11 times and a First-Team All-Pro selection five times. He was on the 2002 Super Bowl team and was named the 2002 Defensive Player of the Year the same season.

Brooks was inducted into the Hall of Fame in 2014.

Warren Sapp was a bit of an enigma when he played on the Buccaneers. Tampa Bay selected Sapp in the first round of the 1995 draft out of Miami.

He played nine years for the Buccaneers as a defensive tackle before moving to the Oakland Raiders. He recorded 77 sacks and 406 tackles during his time in Tampa.

Sapp had most of his success with Tampa Bay. He earned seven Pro Bowl appearances and four All-Pro selections. He was named the 1999 Defensive Player of the Year with 12.5 sacks and four forced fumbles

Sapp was inducted into the Hall of Fame in 2013.

Lee Roy Selmon was a part of the expansion Bucs team. (Photo by J. Meric/Getty Images)

Lee Roy Selmon was the No. 1 pick by the Bucs in the 1976 draft out of Oklahoma – the first year the team was in existence. Selmon spent his entire career with the Buccaneers.

Selmon, a defensive lineman, was the 1979 Defensive Player of the Year with two fumble recoveries and one was returned for a touchdown. He was also a six-time Pro Bowler and a one-time First-Team All-Pro selection.

He was inducted into the Hall of Fame in 1995. He is one of three players who have had their number retired by the organization.

John Lynch was as top safety in the league for several years. (Getty Images)

John Lynch was another part of the Buccaneers’ plan to build up the defense. He was selected in the third round of the 1993 draft – two years before Sapp and Brooks.

He played 11 years for the Buccaneers before signing with the Denver Broncos. From 1993 to 2003, he anchored the Buccaneers’ secondary with the likes of Rondae Barber. Lynch was a five-time Pro Bowler and two-time First-Team All-Pro selection.

Lynch is not in the Hall of Fame yet. He is currently the San Francisco 49ers’ general manager.