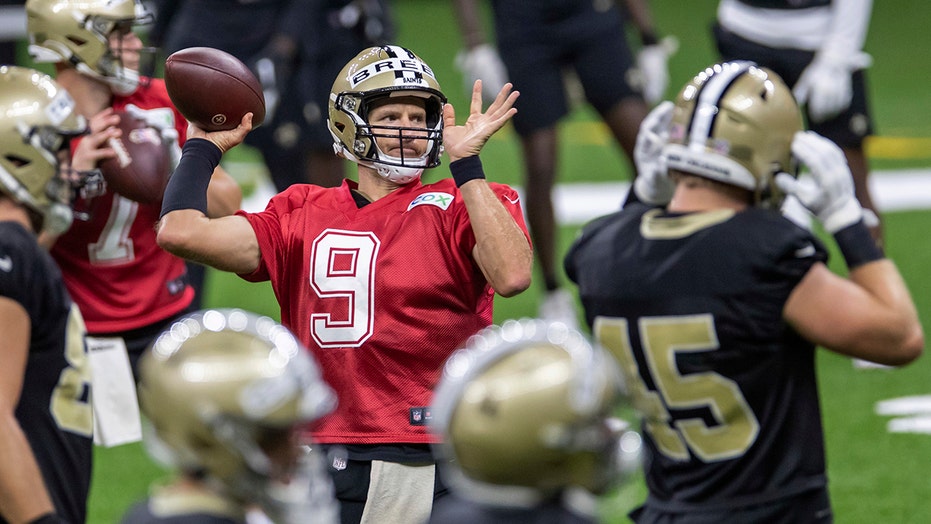 Tom Brady won't have to wait long for a first look at the team his Buccaneers will be chasing in the NFC South.

The 43-year-old Brady will make his Tampa Bay debut when the Buccaneers open at New Orleans on Sept. 13. Brady won a record six Super Bowl championships with New England, but he's starting over in a new offense after signing a two-year deal with Tampa Bay.

The Week 1 matchup will feature the NFL's top two all-time passers. New Orleans' Drew Brees is No. 1 with 77,416 yards. Brady is No. 2 with 74,571 yards. Brees also holds NFL records for completions and touchdown passes.

Brees, 41, has led the Saints to three consecutive NFC South titles. Brady, who has been joined by his longtime Patriots tight end, Rob Gronkowski, in Tampa Bay, brings a new challenge to the Saints' hold on the division.

As the respectful new kid in the division, Brady offered generous praise for Brees and the Saints.

“Obviously, when you go against great players like Drew, and a great team like that, you know there’s not a lot of margin of error,” Brady said. “... They have a great quarterback, a great offense, incredible skill players, great continuity in their organization. ... I have a lot of respect for them, their program and how they run it.”

The Saints, coming off back-to-back 13-3 finishes, have been the division's only winning team the last two seasons.

The Buccaneers have commanded most of the offseason headlines in the division — and much of them elsewhere. The spotlight follows Brady.

“The attention ain’t going to win you no games,” Jarrett said.

The Saints have done a lot of winning the last few years. Actually, left tackle Terron Armstead says the Saints are playing for much more than just finishing ahead of Brady's Bucs. He said the team's goal is “Super Bowl or bust.”

“If we don’t get to the big dance, it was a failure of a season,” Armstead said.

Here are some more story lines to follow as the NFC South plays in the coronavirus-impacted season without any preseason games:

Sean Payton has been the Saints' coach since 2006, the same year the team signed Brees as a free agent. The coach and quarterback have won six division titles and one Super Bowl together.

“Just brilliant minds,” said Saints tight end Josh Hill. "They see the game a little different than most people. They’ve got a gift to see 22 people at once. ... I think that their work ethic, knowledge and vision for the game is unparalleled.”

“I really enjoy that we get to play the Saints first because that’s the team last year that I thought really beat us convincingly,” Barrett said. “We didn’t have a chance in the games and I didn’t like that at all.”

Barrett said the opener provides “a good chance to come out and start the season the right way, and we’re looking forward to that for sure.”

Brady is only part of the new quarterback picture in the league. The Panthers cut Cam Newton, who now is expected to replace Brady as New England's starter. Former Tampa Bay starter Jameis Winston is playing behind Brees after signing a one-year deal with the Saints.

Only Atlanta, with Matt Ryan and Matt Schaub, have the same top two quarterbacks returning in this division.

The familiarity with Joe Brady has helped make for a smooth transition for Bridgewater, who says he has helped teach the system to other quarterbacks.

“I think it made a huge impact for us," Bridgewater said. "Joe, he was able to just continue to pick things up where we left off a couple years ago. He’s not having to teach it to me the first time.

“I know how this offense is supposed to look and we have expectations. With me having experience in this system with Joe, we expect things to work a certain way.”

The Falcons added some important free agents, including running back Todd Gurley, outside linebacker Dante Fowler and tight end Hayden Hurst. Otherwise, continuity could be a key advantage as Ryan operates in the second season with offensive coordinator Dirk Koetter.

The Falcons are looking to build on momentum from a 6-2 finish to last season. A key will be the health of Gurley, whose workload has been monitored in training camp.

The Falcons play the Buccaneers two of the last three weeks of the season.