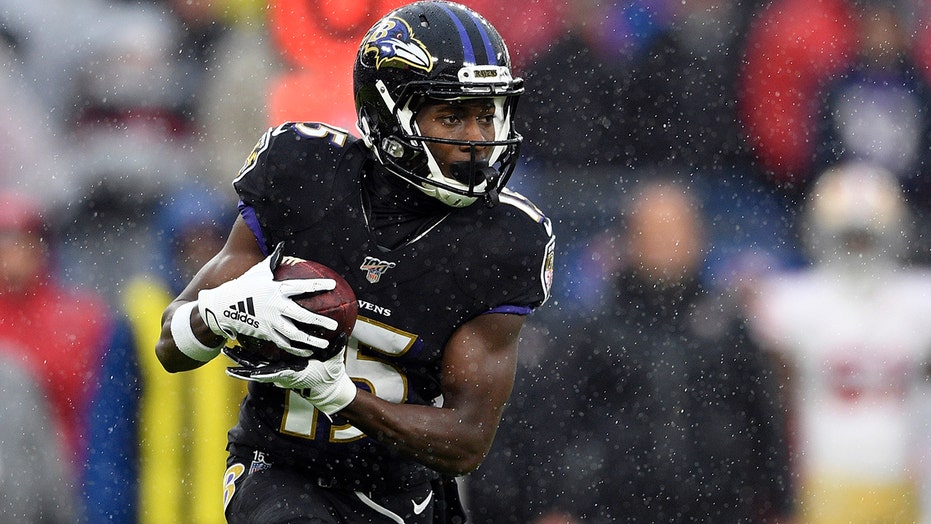 Marquise Brown put up some respectable numbers as a rookie last year with the Baltimore Ravens, leading the team's wide receivers in receptions and touchdowns as the primary downfield target for NFL MVP Lamar Jackson.

Now, after an offseason in which Brown fastidiously lifted weights and finally put a lingering injury behind him, the man with the nickname “Hollywood" is preparing for a sprint to stardom.

Drafted 25th overall in the 2019 draft, Brown never fully hit his stride last season after returning from surgery on his right foot for a lisfranc injury. Brown was still plenty fast, but lighter and just not as confident running his routes as when he was at Oklahoma.

“Sometimes I tried to make a cut my foot wasn’t able to make," Brown said Wednesday on a Zoom call with the Baltimore media. “Doing stuff that I was used to doing and not able to do it, it was frustrating."

Brown began his offseason by working to get his foot at 100 percent. Then he hit the weight room and ran hard on the track.

“It must’ve just clicked for him this offseason, really, to get healthy, to start eating right, to start training harder," Ravens strength and conditioning coach Steve Saunders said. “It would’ve been really easy to sit in the sofa the past four months (during a pandemic) and do nothing. To Hollywood’s credit, he got after it."

When Brown showed up to training camp last week, he had an additional 20 pounds of muscle and a can-do attitude.

“I feel I’ve got bright days ahead," he said. “I feel 100 times better than I did last year. All I’ve got to do now is focus on plays instead of focusing on my feet and trying to stay healthy."

While there's certainly nothing wrong with a season in which he had 46 catches for 584 yards and seven touchdowns, Brown intends to do more in 2020. If there's a deep ball up for grabs or a cornerback that needs to be cut down when Jackson is off and running, the 5-foot-9 Brown intends to be there for his teammates.

“The first thing he said when he came into the building was, ‘I’m trying to block somebody. I’m trying to set the tone in the running game,’" Ravens receiver Willie Snead said. “I could tell by his build that he took that part seriously."

Blocking is extremely important for a team that last year set an NFL record with 3,296 yards rushing. But if the Ravens are to get deep into the playoffs, they're going to need to keep the defense guessing with an improved passing game.

That's where Brown comes in.

“I feel like he is going to have a huge jump — more than people may think," Jackson said. “He was hurt last year but he went out there and battled his tail off each and every game on a messed up foot. And now his full potential is going to show this year."

Early during his offseason workout, Brown knew he was on his way to being a far better player in his second season. Tracking his speed with a GPS tracker provided by the team, he saw quick results.

“My first day running, not even going top speed, I matched my highest speed since I’ve been on the Ravens,” he said. “I just had to make sure it was still there."

His ability to get downfield in a flash remains intact, even on his new, formidable 180-pound frame.

“The speed is always going to be there," Snead said. “I know he’s healthy now. The foot is better, he’s moving a lot better. Now it’s just time to get on the field and proving that part. He looks like a totally different kid than I saw last year. I’m super excited to see what he can do."