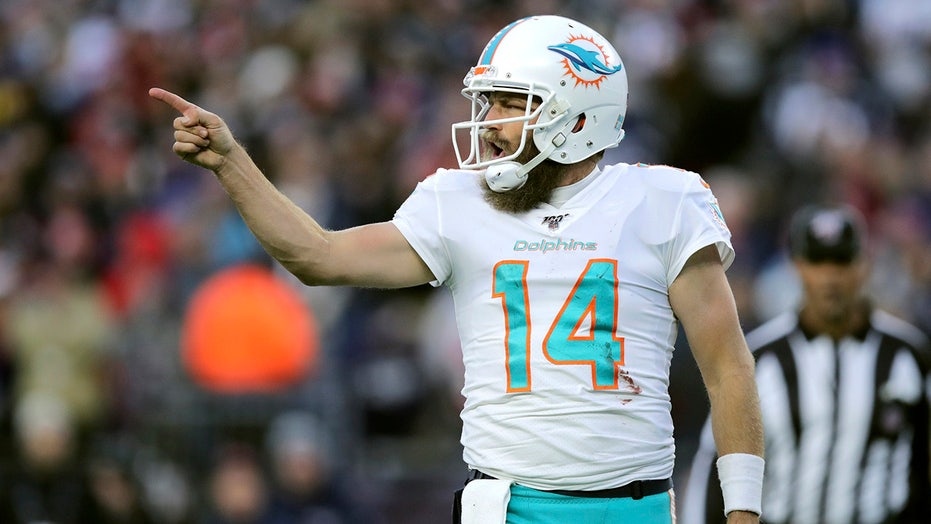 Ryan Fitzpatrick will remain the Miami Dolphins’ starting quarterback for at least another week, further delaying the NFL debut of Tua Tagovailoa.

The Dolphins announced Tuesday on Twitter that Fitzpatrick will get the nod Sunday at San Francisco. The disclosure ended speculation coach Brian Flores was about to turn the offense over to Tagovailoa, drafted with the fifth overall pick as a potential franchise quarterback.

“I’ve been around Fitz for a long time, and I’ve seen him play very, very well,” said Miami offensive coordinator Chan Gailey, who was Fitzpatrick's head coach in Buffalo. “He is capable of being very good for us.”

The 37-year-old Fitzpatrick recently described his career as a roller coaster, and that has been the case this season with Miami (1-3). In two games he has totaled four touchdown passes and no interceptions, and in the other two games — including Sunday’s loss to Seattle — he has thrown for no scores with five interceptions.

Against the Seahawks, Miami settled for field goals on five consecutive scoring drives, but Gailey declined to blame Fitzpatrick.

“If you want to point fingers, you ought to point them at me,” Gailey said, “because I could have done a better job of red-zone coaching this past week, and we wouldn’t even be having this conversation.”

Two of the four quarterbacks taken in the first round of this year's draft — the Bengals’ Joe Burrow and the Chargers’ Justin Herbert — are already starting and played well Sunday. The other, Jordan Love of the Packers, has yet to play as Aaron Rodgers' backup.

Tagovailoa hasn't played since a serious hip injury ended his Alabama career last November, and the cancellation of offseason practices because of the coronavirus pandemic slowed his development. But he's ready if needed, Gailey said.

“He’s one play away from going in to play,” Gailey said. "I feel like he'll go in and play well.

“He’s a rookie who hasn’t played a preseason game or been in a game at all. It’ll be a new experience for him, and he'll have to go in with eyes wide open. But I think he’s going to be ready when his time is called.”