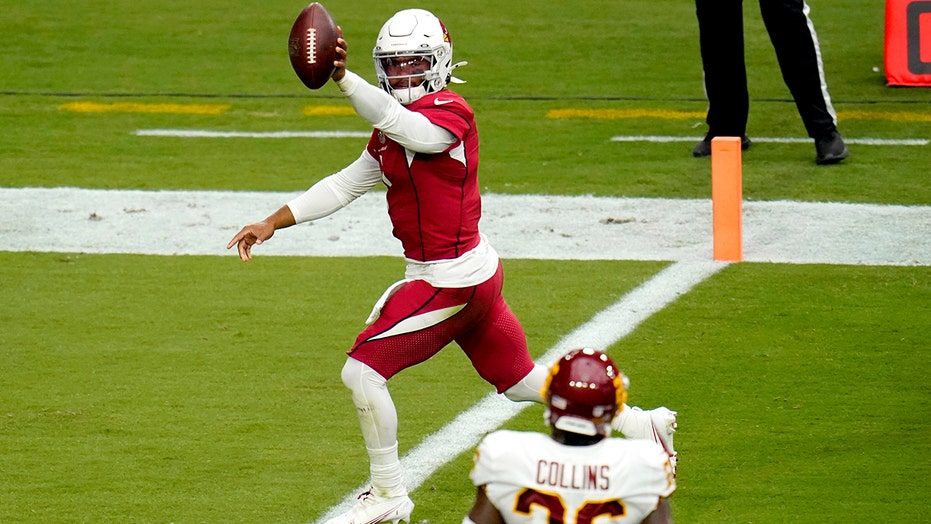 So are the Arizona wins.

Murray's dual-threat skills were on full display Sunday during the Cardinals' dominant 30-15 victory over Washington. The second-year quarterback threw for 286 yards and a touchdown, but the jaw-dropping moments came when Murray tucked the ball and ran, scrambling for two touchdowns that went for 14 and 21 yards.

“I'm glad I don't have to worry about that,” he said with a grin. “He causes a lot of problems.”

The Cardinals (2-0) jumped to a 14-0 lead by the end of the first quarter. They led 20-0 by halftime and 20-3 following the third. DeAndre Hopkins caught eight passes for 68 yards and a touchdown. Zane Gonzalez made three field goals.

Murray alleviated any doubt who would win early in the fourth quarter when he darted through the middle of the field — dancing right past safety Troy Apke in the process — for a 21-yard touchdown that pushed Arizona's advantage to 27-3.

“As soon as I leave the pocket I survey the field," Murray said. “Seeing how the blocks were set up, they were set up pretty perfectly.

Washington (1-1) finally scored a touchdown with 12:20 left in the fourth quarter when Dwayne Haskins hit Terry McLaurin for a 24-yard score. It scored again when Antonio Gibson ran for an 11-yard touchdown to pull within 27-15 after the 2-point conversion failed.

By then it was too late for a rally. Washington came back from a 17-0 deficit to beat Philadelphia last week, but waited much too long to get going on Sunday. Haskins completed 19 of 33 passes for 223 yards and a touchdown.

“A new offense, a new scheme,” Haskins said. “Basically, on offense the whole team is under 25. It is a work in process. The biggest thing is come to work every day with your lunch pail and try to get better.”

In front of a fan-less State Farm Stadium, the Cardinals continued to look like a contender in the NFC West after finishing 5-10-1 last year. Kenyan Drake ran for 86 yards on 20 carries. Murray finished with 67 yards rushing.

“There was never a doubt in our mind that we'd start like this,” Hopkins said. “The team in the locker room we have is a lot of veterans, a lot of good young guys. To be 2-0 is what we expected.”

Arizona outgained Washington 244 yards to 96 in the first half as it built its 20-0 lead.

The Cardinals' revamped defense had a big day, holding Washington scoreless until Dustin Hopkins hit a 24-yard field goal late in the third quarter. Arizona gave up the most yards in the NFL last season, but the defense has been solid in both wins. Free-agent signings linebacker Devon Kennard and defensive lineman Jordan Phillips had a sack each.

“It's night and day,” Arizona coach Kliff Kingsbury said of the defensive improvement.

The teams traded turnovers in an eventful first quarter. Murray's pass into coverage was picked off by Landon Collins, giving Washington great field position at the Arizona 19. Three plays later, Haskins fumbled after getting hit on the arm by Phillips and Chandler Jones snagged the ball out of the air.

Arizona went three-and-out and had to punt, but got the ball right back when Steven Sims fumbled on the return. The Cardinals followed with a six-play touchdown drive capped by Murray's 14-yard run.

The shifty second-year quarterback got some good blocking on the right side and then slipped between two would-be tacklers to coast into the end zone.

“We played two teams today, them and ourselves. That's the truth of the matter,” Washington coach Ron Rivera said. “We hurt ourselves in that first half. We get into third-and-long situations and give up big plays. We take the ball away and we give it right back. We force a punt, we fumble the football. We can’t do those things.”

Hopkins caught his first touchdown pass with the Cardinals on their opening possession. He was completely alone in the back of the end zone on third down and Murray hit him for the 4-yard score to make it 7-0.

Kingsbury further solidified his reputation as an innovative play caller with a gutsy move in third quarter.

The Cardinals faced fourth-and-1 at their 27 and called timeout. Backup quarterback Chris Streveler took the snap, faked a handoff and then ran to his right before flipping the ball to Christian Kirk, who reversed field and gained 3 yards.

Arizona RB D.J. Foster (quad) left in the first quarter. ... Washington right guard Brandon Scherff (knee) was hurt just before halftime and gingerly walked off the field with the help of medical staff. He didn't return.

The Cardinals stayed in the locker room for the national anthem, as they did last week. Washington stood along the sideline and a handful of players — including safety Collins — had a fist raised.

Cardinals: stays at home and faces Detroit next Sunday.