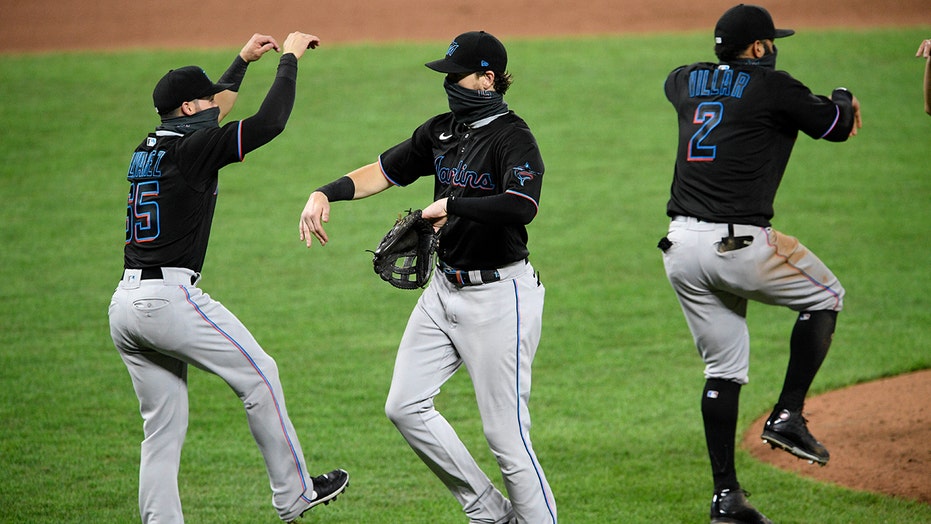 Miami Marlins manager Don Mattingly was talking about this week’s doubleheader sweep at Baltimore that involved a parade of relievers, including several newcomers rescued from unemployment, and after naming three of them he drew a blank.

“I’ve got to remember who all we used,” Mattingly said. “Who else pitched today? I don’t know.”

For the Marlins, this season has been a bit of a blur. It was halted for eight days because of a coronavirus outbreak that sidelined more than half the team, and even now, five games into the resumption of play, there's cause for eye-rubbing.

The Marlins are in first place in August, a first for the franchise. In fact, at 6-1 they have the best record in baseball, staging a one-year turnaround not seen since the 1899 St. Louis Perfectos.

“I’m going to have to write a book after this,” Mattingly said. “You get tested, and you persevere.”

Following a decade of sub-.500 seasons, the Marlins reported for spring training with something close to a swagger in Year 3 of their rebuilding project under CEO Derek Jeter. They still sounded confident even after the virus sidelined three-fifths of their rotation, eight relievers and six other players.

“We’re ready to win games,” rookie outfielder Monte Harrison said. “A lot of people don’t understand that we’ve got some people here that can play. Whatever they want to call us — the bottom feeders or whatever — there’s a rude awakening that is going to be happening.”

Harrison spoke boldly even though he has one career hit, a scratch single Thursday in the Marlins' 8-7 win at Baltimore. That completed Miami's first four-game series sweep in more than four years.

Coming off a 57-105 season, the Marlins are the first team to win at least six of its first seven games after losing 105 or more the previous year since the Perfectos began 7-0 in 1899. That's according to @StatsbySTATS.

And the Perfectos didn't have their season disrupted by a virus.

After only three games, the Marlins became stranded for a week in Philadelphia. The infected players were bused back to Miami, while the holdovers were confined to their hotel rooms and searched for ways to stay sane and in shape.

“I would line up the mattress and set up the chairs as hitters,” closer Brandon Kintzler said, “and I would throw for about half an hour every day.”

Meanwhile, management scrambled for reinforcements, and came up with a mix of veteran castoffs and minor leaguers. Jeter refused to panic and promote top prospects who aren't ready; instead, Miami called up such farmhands as 30-year-old infielder Eddy Alvarez, a former Olympic silver medalist in speedskating.

Alvarez, who joined the Marlins' system last year, started both games of Wednesday's doubleheader. He's 0 for 5 so far as a big leaguer, but he's also undefeated and said the team's record is no fluke.

“The public doesn’t understand our culture here in the Marlins organization, a culture I’ve been extremely blessed to be a part of,” Alvarez said. “I didn’t quite understand what it is to have a winning culture. Derek Jeter takes the lead role. That’s the captain, and we can feel that.”

There's a curious cohesion and chemistry to the patchwork team, including the infected players, who were represented in absentia in Baltimore with cutout images propped in seats near the dugout.

Among the quarantined players back in Miami cheering the club on was shortstop Miguel Rojas, who fired off more than a dozen tweets during the latest win, a seesaw affair.

On the subject of pennant fever, it should be noted that four of the Marlins' six wins have come against the Orioles, who lost 108 games themselves last year. It should also be noted that the 1899 Perfectos faded after their fast start to a fifth-place finish in the National League.

The Marlins going from 105 losses to the playoffs in one season despite a wave of virus infection would be crazy, right?