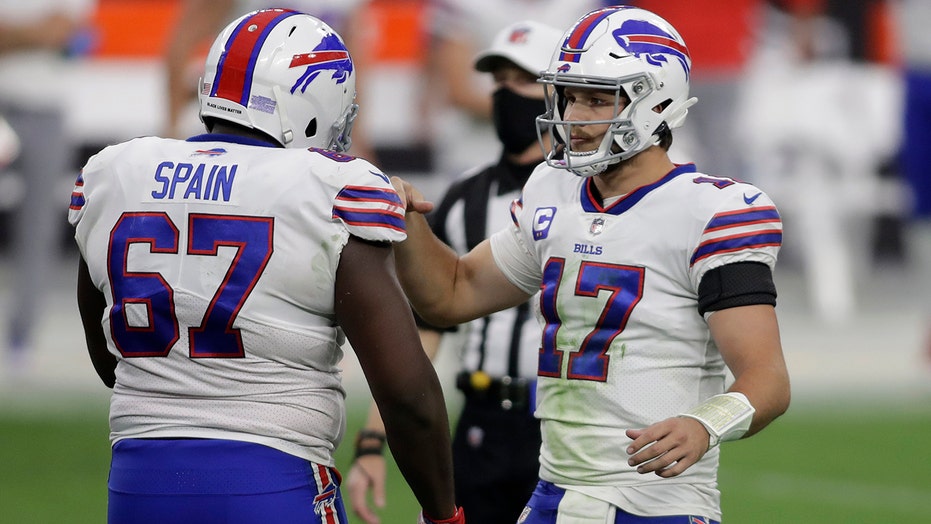 It takes a special breed to weather the elements, especially the wind, and thrive when you play quarterback in Buffalo, so the wait for The Next Jim Kelly had spanned two decades and 19 candidates by the time Josh Allen arrived.

So the great Jim Kelly, Mr.Buffalo’s courageous and inspirational Hall of Fame quarterback, was asked if he is optimistic that his Bills have found the worthy successor to the throne at last.

“I’m very confident in that,” Kelly told Serby Says. “I won’t say 100 percent. But what I see so far, barring injury, I love it. I love his enthusiasm, I like the system that they’re running, I like everything about what’s going on — except for the pandemic that’s going on, because I can’t go watch it.”

Wyoming head coach Craig Bohl was asked if the Bills have found The Next Jim Kelly in his former quarterback.

“Yes,” Bohl said by phone. “There’s greatness with him. There is no stage that is too big for Josh Allen.”

During the pre-draft process, the Giants and Jets inquired as to whether a kid who grew up on a cotton farm near Firebaugh, Calif., and played at Reedley (Calif.) College before Laramie, Wy., could flourish under the searing spotlight.

“I was convinced that he would do well in the New York market,” Bohl said. “Whether they had reservations or not, that’s on their part. I know they asked extensively about that though.”

“The discussions that I had with the Bills were mainly about his DNA,” Bohl said.

“He has a confident, controlled attitude at all times, even when stuff is in chaos,” Bills franchise left tackle Dion Dawkins said by phone. “If I can bring you into the huddle, Josh is getting the play, we’re all in a circle and we’re waiting on him, and when he gets in the huddle, everybody’s looking at his eyes. When you’re looking at the quarterback’s eyes, you can immediately see if he’s worried or if he’s comfortable.”

“I think the No. 1 thing that motivates Josh is the respect he has for his teammates, that he doesn’t want to let us down,” Dawkins said. “Josh is willing to give his body to win a game, and he shows that every game.”

Physically, Allen, at 6-foot-5 and 237 pounds, is a bigger version of Kelly and has a slightly bigger arm. Like Kelly, Allen has the intangibles coaches crave in their quarterback.

Allen — who leads Buffalo (4-0) against Tennessee on Tuesday in a game rescheduled from Sunday after COVID-19 cases among the Titans, was having none of it when the Rams stormed back to take a lead late in the fourth quarter two weeks ago.

“ ‘We’re gonna win this effin’ game,” Dawkins recalled Allen saying. Allen’s 3-yard touchdown pass to tight end Tyler Kroft won it with 15 seconds remaining. “And when he said that, we all knew that we were gonna win, and that Josh was gonna do whatever he had to do to win the football game.

Bohl recalls a Wyoming game in the fourth quarter against a 13th-ranked Boise State team.

“We needed a big play, and he was able to elude the rush and he was running sideways, he was about one yard from the out of bounds on the Boise bench, and just threw a rope in the back of the end zone for a touchdown,” Bohl said. “My jaw dropped. And I had coached against Peyton Manning and a couple of other great quarterbacks, and I saw greatness right then.”

Allen’s completion percentage has risen dramatically from 52.8 percent as a rookie to 70.5 this season.

“Even his first year, first year-and-a-half, his accuracy wasn’t great and he had to work on it, and he did,” Kelly said. “I like what I see now. I would like to see less running. But I definitely do not think that they should take that out of the game plan, because that run-pass option is a tool that they use against defenses. But just know that don’t take too many hits because he is a big target.”

Allen has rushed 25 times for 83 yards with three TDs this season. That gives him 1,224 career rushing yards and 20 TDs.

“Daboll is very creative,” Dawkins said. “I know him and Josh have a great relationship. I definitely think that that is making it a lot easier on Josh, and obviously it makes it a lot easier on the rest of the offense that we have a guy like Daboll that is open to doing literally whatever he has to do to win a football. For crissakes, Daboll put a play in for me to get a touchdown!”

Dawkins, in fact, has two career TD catches. He became less of an option since Beane traded for No. 1 wide receiver Stefon Diggs. Kelly likens it to when the Bills got him James Lofton to go with Andre Reed and Don Beebe.

“I think you’ll see as time goes on, he’ll be looking more for the pass than he is to run the football, because he’s got playmakers now that can do that,” Kelly said.

Dawkins and the offensive linemen consider Allen their little big brother. All of Buffalo does, actually.

“He’s a giant kid, who has a giant personality who plays great football and shows his personality on the field, whether he’s dancing after a play or he’s doing his fist bump thing, like, ‘Let’s go!’ ” Dawkins said. “He’s just showing that energy to the community, and the community is feeding off of him, which is making the community love him.”

Asked what kind of kid he has found Allen to be, Kelly said: “Awesome. He’s a kid, you’re exactly right. He’s a big kid. I can just tell he enjoys the game, he enjoys playing it, it’s more than just a business for him even though he knows it is. I remember when I played, I loved it so much, I had so much fun to the point where I had parties after the games at my house and brought us all together. We just had fun. I see a little bit of that in Josh.”

A love affair grows in Buffalo.

“One of the best decisions I ever made in my life was becoming a Buffalo Bill, because to be able to take this team to four Super Bowls in a row, win or lose, and doing it in front of these fans, who pack the house almost every single home game whether it was 5 degrees or whether it was 75, they were always there,” Kelly said. “Now I know why they call it the Bills Mafia now, they’ve earned the right to be called that, and I love it.”

Those fans deserve The Next Jim Kelly.