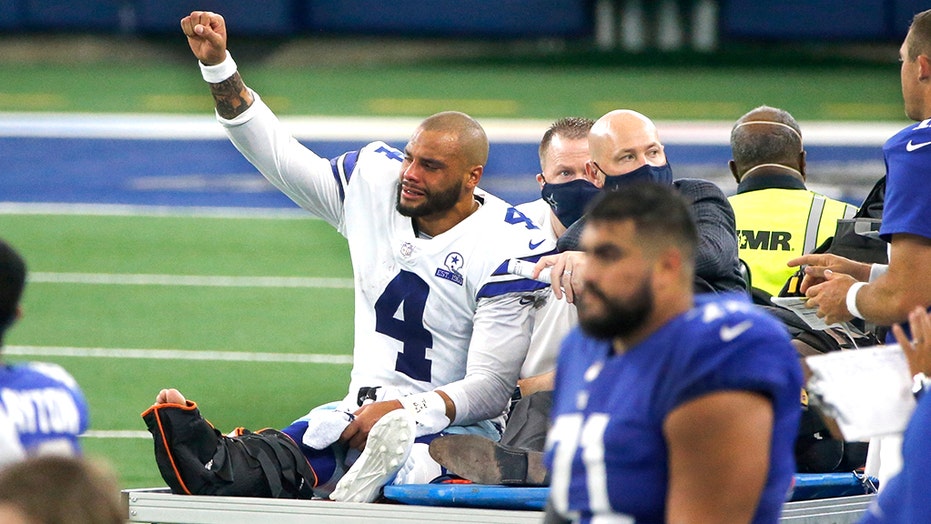 Dak Prescott is expected to be released from the hospital sometime on Monday after sustaining a serious leg injury that saw the star quarterback be carted off the field in pain during Sunday’s matchup between the Dallas Cowboys and the New York Giants.

Prescott underwent surgery late Sunday night to repair a right ankle compound fracture and dislocation. Multiple reports indicated that the surgery was successful but Prescott is expected to miss the remainder of the season.

“We are all heartbroken for Dak and this very disappointing injury,” Cowboys owner Jerry Jones said in a statement.

“The outpouring of messages that I have received regarding his setback speaks volumes to the respect and admiration that he has earned from his teammates, former Cowboys’ players and Cowboys’ supporters everywhere," Jones added.

The Cowboys were leading by just one point with a little over six minutes in the third quarter when Prescott was injured at the end of a 9-yard run after getting tackled by Giants’ defensive back Logan Ryan. Prescott reached for his right foot in obvious pain -- it was bent at an awkward angle.

“I feel terrible for him,” first-year coach Mike McCarthy said. “He was having a tremendous year in the short time working with him. He’s made such an impression on me and he’s clearly the leader of this football team. I have no doubt that he’ll bounce back from this and this will be all part of his great story.”

Prescott has started the first 69 games of his career, from the beginning of his rookie season in 2016. The two-time Pro Bowler has totaled 17,468 passing yards and 106 touchdowns.

The Cowboys went on to beat the Giants 37-34 to improve their record to 2-3. Dallas will move forward with Andy Dalton at quarterback when they take on the Arizona Cardinals next week.

The Associated Press contributed to this story.