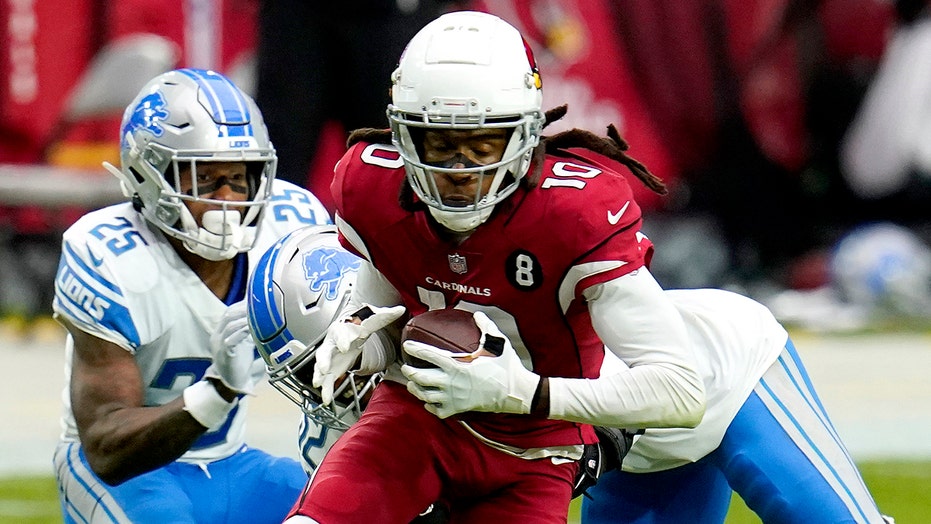 Arizona Cardinals wide receiver DeAndre Hopkins appeared to flip off Trump supporters as he drove past in a Ferrari on Arizona's I-10 highway on Sunday, according to multiple reports.

Hopkins, 28, one of the top wide receivers in the NFL, allegedly made the obscene gesture as he was driving through a miles-long caravan of Trump supporters in Glendale, according to FOX 10 Phoenix.

Photos of the alleged incident, which occurred around 1:30 p.m., were posted online by Twitter users. Some of the motorists in the caravan also accused Hopkins of recklessly driving his luxury sports car.

COWBOYS' EZEKIEL ELLIOT TAKES OWNERSHIP FOR BLOWOUT LOSS TO CARDINALS: 'THIS ONE IS ON ME

"It's scary when they are coming up fast and swerving into you," said April Garcia, according to The Arizona Republic. She added that people were also throwing water and other objects at the caravan.

Hopkins was driving in a Ferrari when he allegedly made the gesture. (Mark Forgy)

EXPLICIT: Hopkins appeared to give the supporters two middle fingers up (Mark Forgy)

Hopkins reportedly made the gesture on the way to State Farm Stadium, ahead of the Cardinals game against the Seattle Seahawks on Sunday night.

He was seen wearing the same shirt upon his arrival at the stadium later that afternoon, the paper reported.

As of Sunday evening, the Department of Public Safety and the Cardinals had yet to release information about the incident, according to FOX 10.

The Cardinals did not immediately reply to Fox News' request for comment.

The Cardinals later defeated the Seahawks in dramatic fashion. Zane Gonzalez made a 48-yard kick with 20 seconds remaining in overtime to give Arizona the 37-34 victory, which handed Seattle their first loss of the season.

Hopkins, who was traded from the Houston Texans to the Cardinals earlier this year, finished the game with 10 receptions for 103 yards. He also scored a touchdown.