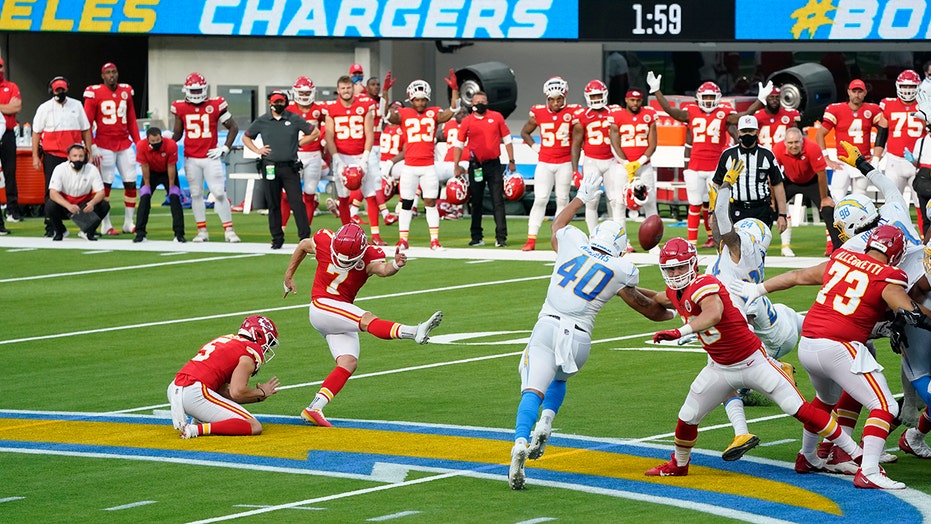 Butker's game-winner was his third field goal of the day and his second from 58 yards, which tied a Chiefs record for distance. He nailed a 30-yarder on the final play of regulation.

In overtime, Butker sent the ball through the uprights from 53 yards, but KC was called for a false start. Then the Chargers called timeout, giving him a rehearsal kick from 58 that he also made before the one that counted.

Patrick Mahomes completed less than half of his passes in the first half for only the third time in his career but rallied to finish 27 of 47 for 302 yards and two touchdowns. Tyreek Hill (five catches, 99 yards) and Travis Kelce (nine receptions, 90 yards) each had TD receptions.

Playing their first game at SoFi Stadium, the Chargers (1-1) won the coin toss in overtime but went three-and-out. The Chiefs (2-0) got the ball at their 21 and went 39 yards in 13 plays.

Herbert was 22 of 33 for 311 yards with a touchdown and interception, becoming the ninth quarterback since the merger to have a 300-yard game in his NFL debut.

Herbert, the sixth overall pick in April’s draft, got the call after Tyrod Taylor re-aggravated a rib injury during pregame warmups. Coach Anthony Lynn said he found out just before the coin toss that Taylor was unable to play and that Taylor was taken to a hospital.

Herbert passed and rushed for touchdowns in the first half, becoming the first player since Bob Clatterbuck of the New York Giants in 1954 to do that in his debut. He joined Cam Newton and Otto Graham as the only QB’s to throw for 300 yards and have a rushing TD in their first game.

The defending Super Bowl champion Chiefs beat the Chargers for the 12th time in 13 meetings.

After Hill’s 55-yard touchdown and 2-point conversion to tie it with 12:58 remaining in the fourth quarter, Herbert and the Chargers went on a 10-minute drive, resulting in Michael Badgley’s 23-yard field goal with 2:30 remaining.

Badgley’s 41-yard kick midway through the third quarter extended the Chargers’ lead to 17-6 before the Chiefs rallied to tie it. Butker's first 58-yarder pulled them within eight.

Herbert's only ill-advised throw came late in the third quarter when he was picked off by L’Jarius Snead deep in Chiefs territory instead of taking the rushing yards on a scramble.

Kansas City took advantage, driving 95 yards in six plays. Mahomes rolled left and connected with Hill, who caught it at the LA 6 before getting into the end zone.

Herbert drove the Chargers 79 yards in eight plays after the opening kickoff, culminating in a 4-yard rollout off right end. It was the first rushing TD by a Chargers QB in nine years.

The Chargers ran the ball on their first two plays before Herbert’s first pass was incomplete. He then completed a 35-yard screen pass to Joshua Kelley. Herbert also completed a 16-yard pass to a diving Austin Ekeler to move it to the KC 4.

Kansas City got on the board midway through the second quarter when Mahomes found Travis Kelce in the back right corner of the end zone for a 10-yard score. Jerry Tillery blocked the extra-point attempt.

Herbert made it 14-6 with a 14-yard bullet to Jalen Guyton with 2:30 remaining in the first half.

Chargers: OT Bryan Bulaga suffered a knee injury during the first quarter and did not return. Defensive end Justin Jones (shoulder) and safety Jalen Watkins (groin) were injured in the second half.

Chiefs: Travel to Baltimore for a matchup of the last two NFL MVPs on Monday, Sept. 28. Mahomes has won both games against reigning MVP Lamar Jackson and the Ravens.