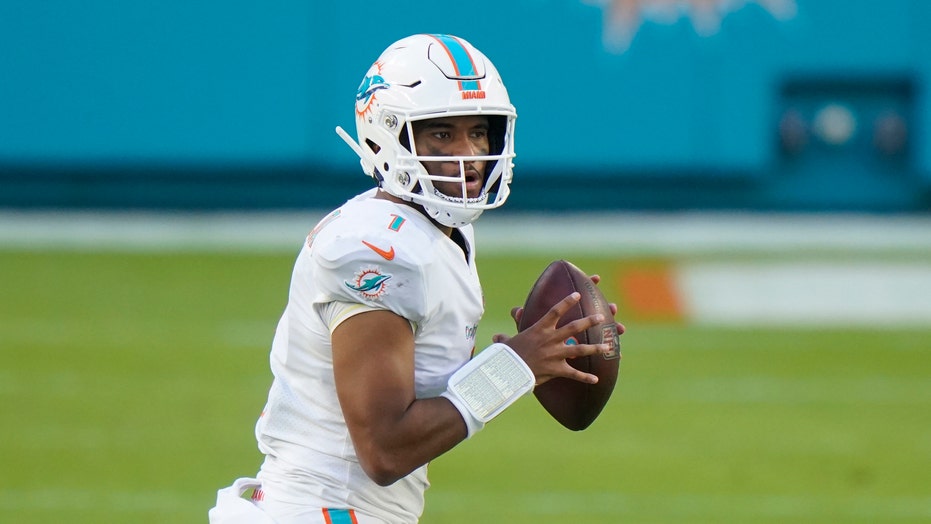 On the sideline, Tua Tagovailoa showed plenty of moves. He entertained those along the bench by dancing after the Miami Dolphins' first touchdown, and greeted 5-foot-6 Jakeem Grant with a leaping chest bump to the face mask after another score.

On the field, however, Tagovailoa didn’t do much in his first NFL start. Teammates made sure he didn’t need to.

The Dolphins were outgained by 326 yards, the largest discrepancy for a winning team in 18 years. They struck for scores 75 seconds apart on Andrew Van Ginkel’s 78-yard fumble return and Grant’s team-record 88-yard punt return.

Miami came up with four takeaways in the first half, and at halftime led 28-10 despite being outgained 224-54.

The big plays helped Tagovailoa overcome a costly early turnover. The No. 5 overall pick in this year’s draft finished 12 of 22 for 93 yards, with several passes dropped.

“I don’t think I played to the standard of what this offense is capable of," Tagovailoa said. "It’s good we got the win. Thank God we have a good defense.”

Los Angeles’ Jared Goff faced constant pressure and went 35 for 61 for 355 yards and one score, with two interceptions and two lost fumbles.

“This is going to hurt,” Goff said. "Our defense played really well and gave us all the opportunities we needed.”

The Rams ran 92 plays to the Dolphins’ 48, and Miami won while Tagovailoa's offense totaled eight first downs and 145 yards.

The Dolphins (4-3) have outscored opponents by a combined 95-34 in the past three games, and they’re above .500 for the first time in their 23 games under second-year coach Flores.

The Rams (5-3) did manage to give Tagovailoa a jarring NFL greeting. The first time the rookie tried to throw, the ball came loose when his arm was hit by Aaron Donald, and Tagovailoa was then driven to the turf by Michael Brockers as Leonard Floyd recovered the fumble.

“That was a good hit," Tagovailoa said. “That was definitely a welcoming."

Then came 28 consecutive points by the Dolphins. Tagovailoa capitalized on their first takeaway by throwing a 3-yard touchdown pass to DeVante Parker. Tagovailoa retrieved the ball as a souvenir and carried it to the sideline, then launched into his celebratory dance.

The early 33-yard scoring drive was the Dolphins' longest, as the big lead allowed them to keep Tagovailoa mostly under wraps.

“You can just tell they were trying to ease him in there,” Rams safety John Johnson III said. “He's going to be a good player, but it's hard to judge a guy against our defense. We tried to make him see a lot of different things, and for the most part it worked.”

The Rams' defense received little support from their offense, though. One early Los Angeles scoring threat ended when Emmanuel Ogbah forced a fumble by sacking Goff. Van Ginkel scooped the ball up with nothing but open field in front of him and sprinted the distance to give Miami a 14-7 lead.

Barely a minute later, Grant sprinted through a seam in the Rams’ punt coverage for his fifth career return TD, and his third punt return for a score, both franchise records.

Shaq Lawson’s strip-sack of Goff and Kyle Van Noy’s return gave the Dolphins the ball at the 1, and they scored on the next play for a 28-7 lead. It was a stunning sequence for the Rams, who had just eight turnovers in their first seven games and trailed for less than 54 minutes previously all season.

“We heard a lot about the Rams' defense," Miami safety Eric Rowe said, “but they had to worry about our defense.”

“He woke up this morning, he had an illness,” coach Sean McVay said. “He will be able to return home with us.”

Fifteen Rams players knelt during “The Star-Spangled Banner.” The Dolphins stayed in the locker room during the national anthem.

Dolphins: next Sunday make their first visit to Arizona since 2012.

Rams: have a bye before playing at Seattle on Nov. 15. The teams split last year’s series.