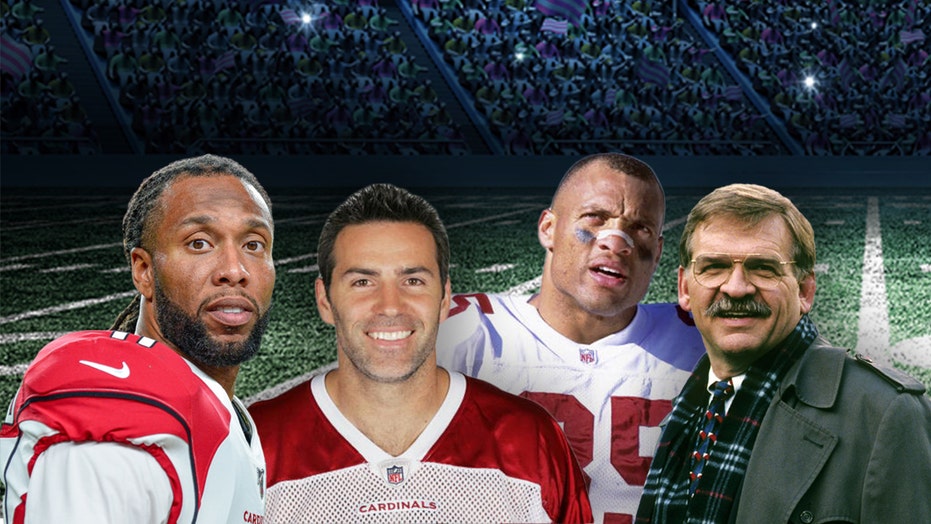 The Arizona Cardinals are one of the oldest teams in the NFL, having been founded as an amateur team in Chicago in 1898.

The franchise went on to join the American Professional Football League when it was founded in 1920 before it merged into the NFL.

Despite having the longest history in the league, the Cardinals have never won a Super Bowl -- although they did win two NFL championships in 1925 and 1947.

But who would make a Mount Rushmore of Cardinals players? Take a look at the list below.

Larry Fitzgerald is one of the best wideouts of all-time. (Photo by Dustin Bradford/Getty Images)

Larry Fitzgerald is arguably the best player in Cardinals’ history. The 36-year-old wide receiver was drafted No. 3 overall by the franchise in 2004 and has been a powerhouse in Arizona ever since.

After 11 Pro Bowl appearances and several seasons as the league leader in receptions and receiving touchdowns, Fitzgerald is still going strong.

Kurt Warner led the Cardinals to a Super Bowl. (Photo by NFL Photos)

Kurt Warner will go down in Cardinals’ history as the only quarterback to lead the franchise to its only Super Bowl appearance in 2008, when he threw for 1,100 yards and 11 touchdowns in the postseason.

Warner is a legend outside of Arizona, having been signed by the Green Bay Packers as an undrafted free agent in 1994 before helping the St. Louis Rams win a Super Bowl in 2000.

The four-time Pro Bowler was eventually inducted into the Pro Football Hall of Fame in 2017.

Dan Dierdof was a top offensive lineman for the Cardinals. (Photo by Greg Crisp/Getty Images)

In the peak of his NFL career, Dan Dierdorf was not only the best offensive tackle the Cardinals had ever seen but also one of the best in the league.

Dierdorf was selected in the second round of the 1971 draft after a successful college career at the Unversity of Michigan.

The six-time Pro Bowler and five-time first-team All-Pro didn’t allow a single sack between 1976 and 1977 and set a league record in 1975, allowing just eight sacks in 14 games.

Aenas Williams is one of the top cornerbacks in Cardinals' history. (Photo by Joe Robbins/Getty Images)

Another late-round draft pick, Aeneas Williams is among the best cornerbacks in Cardinals' history and arguably NFL history.

Williams attended Southern University where he only began playing football in his junior year. He was selected by the Cardinals in the third round of the 1991 draft and had an explosive rookie season, finishing second in the league in interceptions.

He made six consecutive Pro Bowl appearances, eight in total, and was named first-team All-Pro five times between 1995 and 2001.

He was inducted into the Pro Football Hall of Fame in 2014.