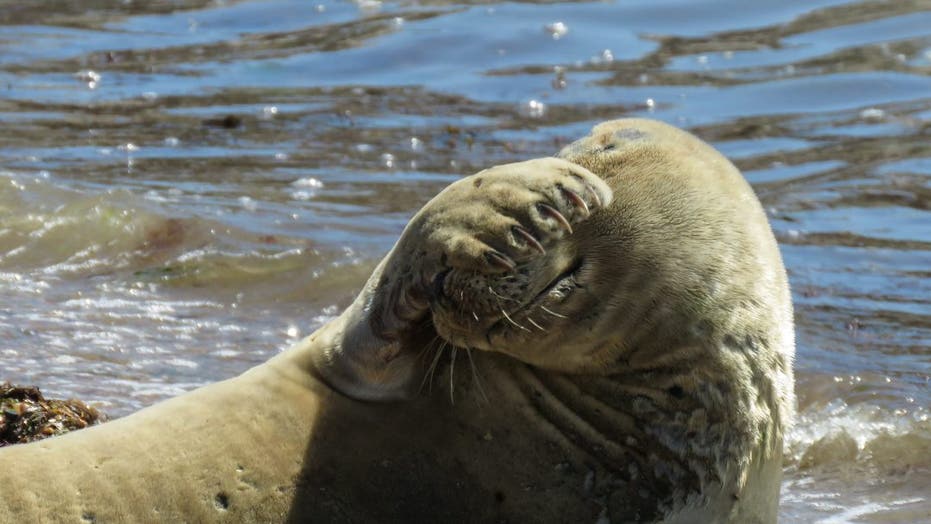 Someone isn't ready for their close-up, Mr. DeMille.

A seal has gone viral after an amateur photographer snapped an image of the modest mammal covering its face with its flipper.

Helen Ford was walking along Weymouth beach in Dorset, England, looking at wildlife, when she saw the seal relaxing on the shore, British news agency SWNS reports.

This is the moment a camera-shy seal was captured on film. (Credit: SWNS)

As Ford started taking pictures, the sedentary seal sprang to life and covered its face with its flipper.

"I sat down on the pebbles a distance away so as not to frighten it and using my Canon SX60 PowerShot camera I started taking pictures," Ford, 50, said. 鈥淚 was not too sure how long the seal would stay but it just seemed to be posing for every shot I took."

50-year-old Helen Ford captured the image while frequenting her local beach she spotted the seal chilling on the beach. (Credit: SWNS)

"It truly was a magical moment as I have never seen a seal on Weymouth beach," Ford added. "To actually see a seal right in front of me like that and to be able to get some clear and fun photos was beyond exciting."

Harbor seals "sunbathe" regularly during their lives, doing so to regulate their body temperatures, rest, give birth, nurse and avoid predators, according to the National Oceanic and Atmospheric Administration.

Last month, a wild seal was spotted off the English coast begging tourists for food, near the small naval port at Dartmouth, Devon, England.