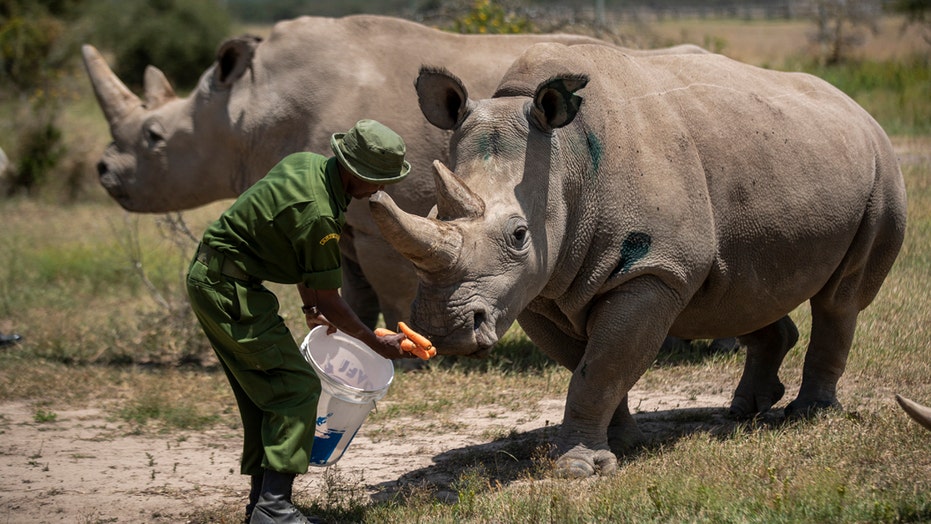 Of the 10 eggs that were harvested from the world's last two northern white rhinos, Najin and Fatu, on Aug. 22 in Kenya, 7 were successfully fertilized. Four of the seven eggs came from Fatu, while the remaining three came from Najin. They were successfully inseminated via Intra Cytoplasm Sperm Injection (ICSI).

"We were surprised by the high rate of maturation achieved as we do not get such high rate (comparable to what we get with horse oocytes) with southern white rhino females in European zoos," said Cesare Galli of Avantea in Cremona (Italy) who led the fertilization procedure, in a statement.

This is the fertilized egg of Northern white rhino. (Credit: Ami Vitale)

The sperm came from two white rhino bulls, Suni and Saut, who had lived in a zoo in the Czech Republic prior to their death. Sudan, the world’s last male northern white rhino, died after “age-related complications” in March 2018.

"The semen of Saut was very difficult to work with and to find three live sperms needed for the eggs of Najin we had to thaw two batches of semen," Galli added. "Now the injected oocytes are incubated and we need to wait to see if any viable embryo develop to the stage where it can be cryopreserved for later transfer."

It will be about 10 days before it is known whether the eggs have become embryos, Avantea, an Italian assisted-breeding company said Monday.

Galli, who co-founded Avantea, said that to improve chances for a species' continuation, it is better not to wait to "get to the last two individuals before you use this technology."

"It does create a little emotion," Silvia Colleoni told the Associated Press in a phone interview the day after the fertilization procedures. "After it was over, I was calm, but it's a manual task, any error, any slipping, if it falls, will result in irreparable damage."

As neither Najin nor Fatu are able to carry a full-term pregnancy, experts hope that if an embryo is developed, it can be carried by a surrogate mother rhino.

The ultimate goal is to create a herd of at least five animals that could be returned to their natural habit in Africa. That could take decades.

It's possible that Sudan's sperm, which is still in Kenya, may be used for future attempts at creating embryos, Galli added.

Researcher Paola Turini works at the Avantea laboratory during the inseminating of eggs from the last two remaining female of northern white rhinos with frozen sperm from two rhino bulls of the same species, in Cremona, Italy, Sunday, Aug. 25, 2019. The northern white rhino is on the verge of extinction but Sunday's operation raises hopes that they'll survive. (AP Photo/Antonio Calanni)

White rhinos are considered Near Threatened, according to the World Wildlife Fund. It is estimated that between 19,600 – 21,000 animals exist in protected areas and private game reserves. The northern white rhino is considered a subspecies of the southern white rhino.

White rhinos can live to between 40 and 50 years.