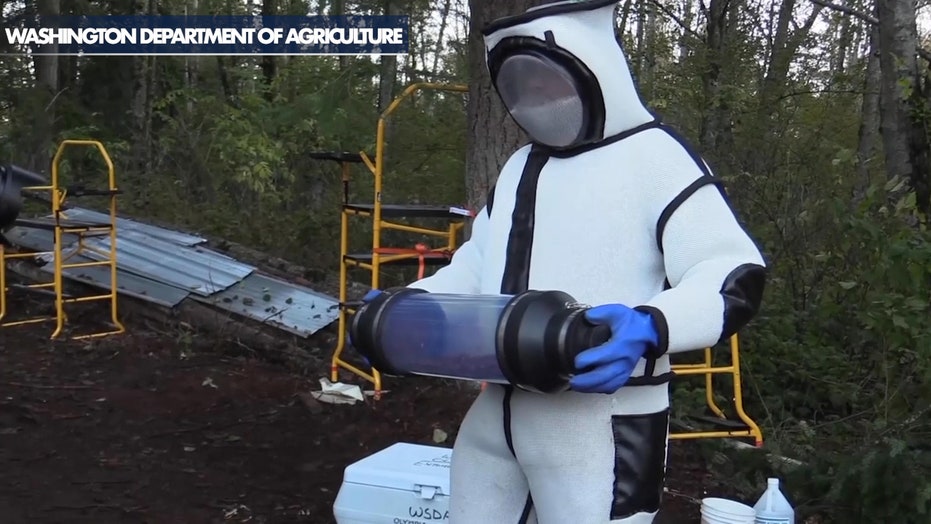 On Saturday, scientists from the Washington State Department of Agriculture (WSDA) successfully vacuumed dozens of Asian giant hornets out of a tree in Blaine, Wash.

The site was the first nest housing so-called “murder hornets” to be eradicated in the U.S. An aggressive insect species, Asian giant hornets pose a major risk to bee colonies.

“The eradication went very smoothly, even though our original plan had to be adapted due to the fact that the nest was in a tree, rather than the ground,” WSDA managing entomologist Sven Spichiger said, in a statement. “While this is certainly a morale boost, this is only the start of our work to hopefully prevent the Asian giant hornet from gaining a foothold in the Pacific Northwest. We suspect there may be more nests in Whatcom County.”

Some 98 worker hornets were removed from the nest on private property by WSDA entomologists, officials said. “During the early morning extraction, 85 hornets were vacuumed out of the nest and collected another 13 live hornets were collected with a net while observing the nest on Friday,” they explained, in the statement.

Sven Spichiger, Washington State Department of Agriculture managing entomologist, walks with a canister of Asian giant hornets vacuumed from a nest in a tree behind him Saturday, Oct. 24, 2020, in Blaine, Wash. (AP Photo/Elaine Thompson)

On Monday, the WSDA tweeted a video of the hornets sucked out of the tree. “Even being vacuumed out of bed on Saturday didn't stop these tough ladies,” it said. “Post-eradication counting revealed that all of the 85 #AsianGiantHornets were still alive later in the day on Saturday.”

The hornets, officials added, will be used for research, quipping that “no, you can't have one.”

In their statement, officials said they will cut the tree down and open it see how big the nest was. “The entomologists also want to determine whether the nest had begun to produce new queens or not,” they explained.

WSDA will continue setting traps through at least November in hopes of catching any more Asian giant hornets still in Whatcom County.

Fox News’ Robert Gearty and The Associated Press contributed to this article.