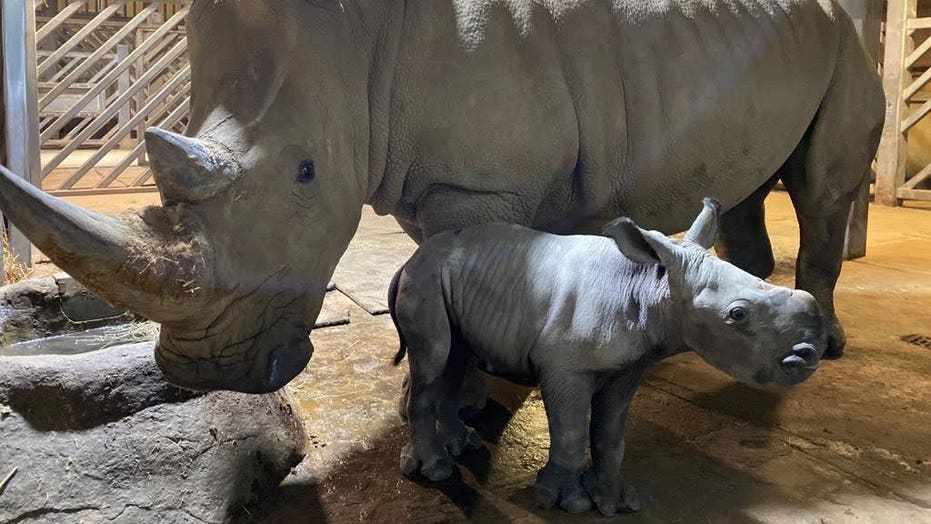 2020 has been a turbulent year, to say the least, but an endangered white rhino is giving hope to visitors at Colchester Zoo in the U.K.

The unnamed calf was born on Oct. 14, according to British news agency SWNS. The male calf is "becoming stronger day by day" and has already shown he's a "mischievous character," the zoo said in a statement.

The newborn calf brings the total number of white rhinos at the Essex-based zoo to six, including its mom, Astrid. A first-time mom at the age of seven, Astrid carried the calf for approximately 16 months.

"During the evening on Wednesday 14th October the Animal Care Team noticed Astrid’s behavior change, indicating that she was in labor," a spokesperson for the zoo said. "Therefore staff came into the zoo at 9:00 p.m. to monitor Astrid close by via the cameras so they were on hand if any problems arose. Astrid’s birth progressed really well, and luckily there was no need for intervention by the Animal Care Team as the healthy calf was born at 9:45 p.m."

An hour after being born, the calf was able to stand and Astrid was providing him with care.

The calf will continue to live with Astrid, his father, Otto, and the other white rhinos that live at the zoo, including one that was born earlier this year.

During the evening on October 14th, the Animal Care Team noticed Astrid's behavior change which indicated that she was in labor, therefore, staff came into the zoo at 9.00 pm to monitor Astrid close by via the cameras so they were on hand if any problems arose. (Credit: SWNS)

White rhinos, which are broken into two subspecies, the northern white rhino and the southern white rhino, are listed as Near Threatened on the International Union for Conservation of Nature Red List.

The Animal Care Team had been viewing Astrid鈥檚 behavior out of hours on a camera system for 2 weeks prior to birth as they were sure little one would be imminent from Astrid鈥檚 behavior. (Credit: SWNS)

White rhinos can live between 40 and 50 years.