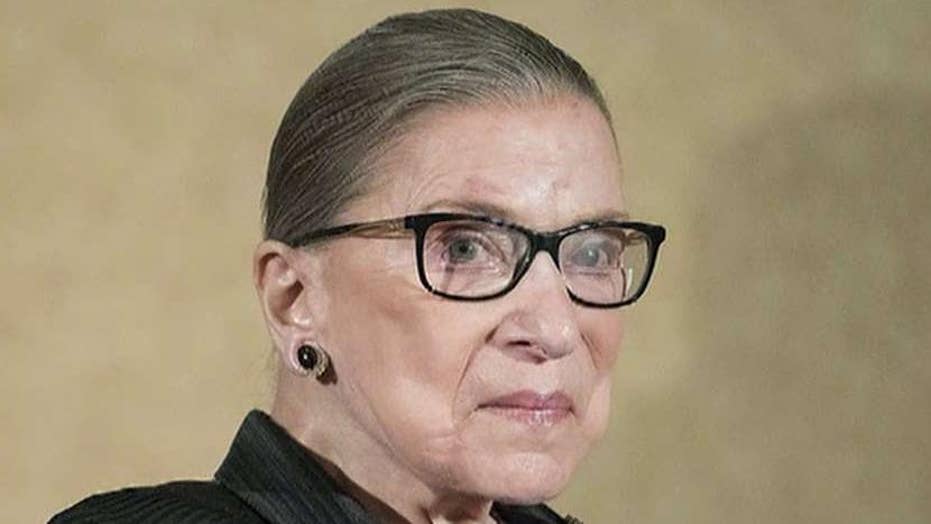 Ginsburg spent two nights at Johns Hopkins Hospital in Baltimore where she received an IV with antibiotics and fluids; Kristin Fisher reports.

Ruth Bader Ginsburg came to the rescue of President Trump Friday and allowed his financial records to remain secret from House Democrats – for now.

The liberal Supreme Court Justice granted an emergency request from Trump’s lawyers to delay enforcement of subpoenas House Democrats issued to Deutsche Bank and Capital One for Trump’s bank records.

A lower court Tuesday ordered the banks to cooperate with Congress in handing over a treasure trove of Trump’s financial dealings in the midst of the House’s impeachment inquiry. But Ginsburg stayed the ruling until 5 pm on Dec. 13.

That’s when the Supreme Court is expected to vote on whether to take up at least one of the two pending cases involving Trump’s financial records.

The latest dispute is over three subpoenas issued by the Democratic-led House Intelligence Committee and House Financial Services Committee for bank records for Trump and three of his children, Don Jr, Ivanka and Eric Trump.

Trump’s lawyers argued the sweeping requests for records exceed the committee’s legal authority. But the United States Court of Appeals for the Second Circuit in New York ruled Dec. 3 the committees had legitimate legislative purposes for issuing the subpoenas and ordered the banks to promptly begin transmitting the documents in daily batches starting next week.

Ginsburg signed the order because she’s in charge of deciding emergency appeals out of New York. Her decision in favor of Trump’s lawyers for a one-week delay isn’t considered an indication of how she’d rule on the merits of the broader records dispute between Trump and Congress.

Ginsburg – affectionately known as RBG – was nominated to the high court by President Bill Clinton in 1993. The 86-year-old has become an icon for the liberal left and for the Trump resistance.

Before he won the election, Ginsburg called Trump a “faker” in a July 2016 CNN interview and faulted him for failing to disclose his tax returns -- as is custom for presidential candidates.

"He has no consistency about him. He says whatever comes into his head at the moment. He really has an ego. ... How has he gotten away with not turning over his tax returns? The press seems to be very gentle with him on that,” Ginsburg said.

Trump punched back by tweeting Ginsburg’s “mind is shot” and urging her to resign.