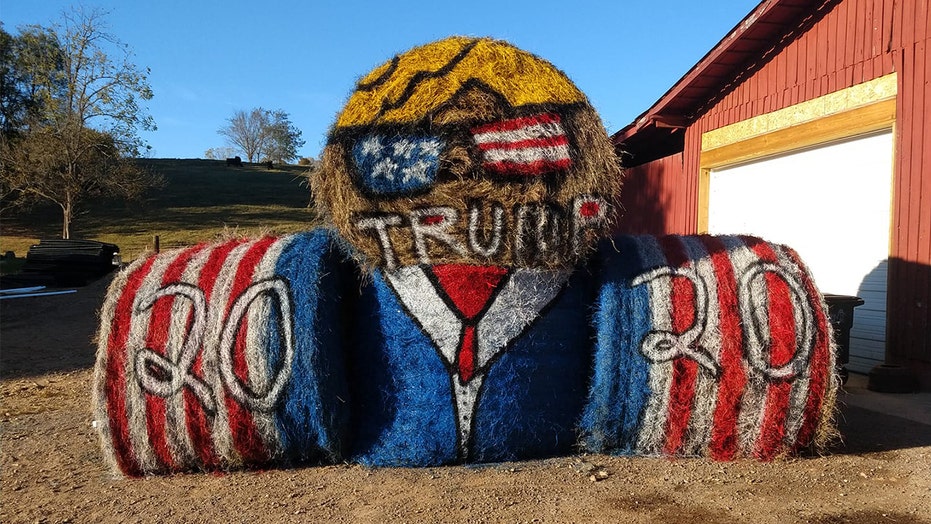 Adrian Powell, of Red Boiling Springs, rolled out a unique show of support on a stack of hay bales over the weekend, after vandals cut down a half dozen of his purchased pro-Trump signs.

He painted an American-flag themed mural over a stack of bales with President Trump’s trademark golden hairdo and red tie, along with the phrase, “Trump 2020.”

Adrian Powell, of Red Boiling Springs, rolled out a unique show of support on a hay bale over the weekend. (ADRIAN POWELL)

He told Nashville-based WZTV that someone cut down a half dozen of his Trump 2020 campaign signs, which he repaired and reinstalled.

He is not pressing charges against the vandals and actually had begun painting the hay bales before the signs were damaged Saturday, the outlet reported.

2020 CAMPAIGN SIGNS IN FLORIDA VANDALIZED AND STOLEN AS ELECTION LOOMS

Powell said his other signs had been cut, but he sewed them back together and reinstalled them on his property. (ADRIAN POWELL)

Vandalism involving campaign signs this election season is nothing new. A Minnesota family awoke in late September to find their garage in flames and “Biden 2020” graffiti sprayed on the side of it. They said it was because they’d put up a “Trump 2020” flag.

And earlier this month, a Pennsylvania woman told the Philadelphia Inquirer that she was so fed up with people stealing her pro-Biden lawn signs that she and her Army veteran husband painted a big one on her garage door.

Sonja Bihary told the outlet that she could see Trump signs from almost every direction from her home. So she put some pro-Biden ones out to show her support for the Democratic ticket, but they kept vanishing.

Local reports in Florida over the weekend suggested campaign signs for both Trump and Biden were being vandalized in the crucial swing state -- with some stolen, spray-painted and damaged in multiple counties.