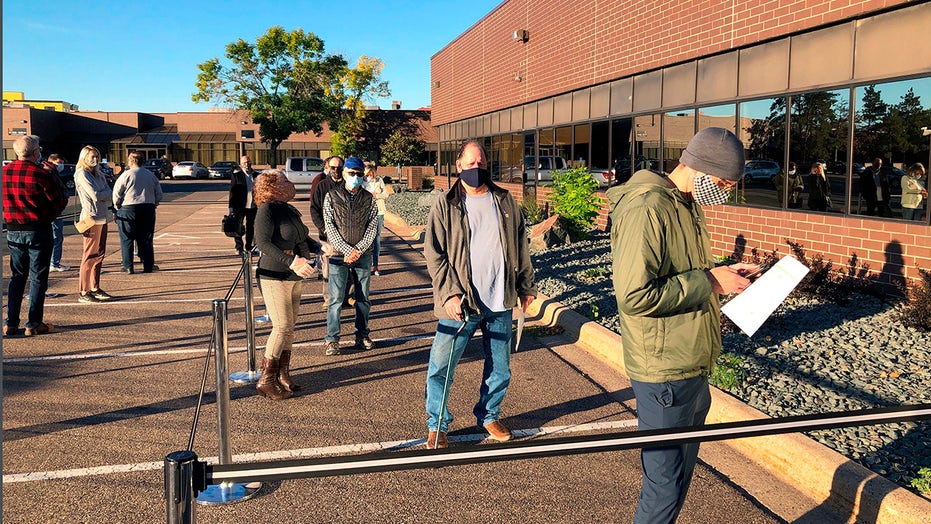 Minnesota Attorney General Keith Ellison announced on Tuesday that his office has launched an investigation into a Tennessee-based private security company reportedly recruiting armed veterans to monitor polling places around the state on Nov. 3.

Ellison, a Democrat, and other state attorneys general have raised concerns over when “poll watching,” which is legal, crosses the line into illegal voter intimidation tactics.

President Trump received criticism after urging supporters during the first presidential debate against Democratic candidate Joe Biden to “go into the polls and watch very carefully.”

Ellison on Oct. 14 formally requested that Atlas Aegis, a private security company based in Franklin, Tenn., provide information on who, if anyone, contracted them; what their anticipated role will be, if any, near polling places; what training they will receive; and how they will meet Minnesota's requirements for appropriate licenses and permits.

The company has 10 days to reply, based on a Ramsey County District Court order.

“Minnesota and federal law are clear: no one may interfere with or intimidate a voter at a polling place, and no one may operate private armed forces in our state. The presence of private ‘security’ at polling places would violate these laws. It would make no one safer and is not needed or wanted by anyone who runs elections or enforces the law. For these reasons, my office is formally investigating Atlas Aegis,” Ellison said in a statement on Tuesday.

“I encourage every eligible Minnesotan to vote in whatever way works best for them,” the state attorney general continued. “Minnesotans have every reason to expect our elections will be as safe and secure as they have always been. We don't expect to have to enforce these laws, but we will use all their power and every resource available to us if we have to.”

In an online job listing earlier this month, Atlas Aegis sought U.S. special operation forces veterans for "security positions in Minnesota during the November Election and beyond to protect election polls, local businesses, and residences from looting and destruction," the Minneapolis Star-Tribune reported.

PROUD BOYS DENY THREATENING FLORIDA DEMS TO VOTE TRUMP, EMAILS MAY HAVE COME FROM OUTSIDE US

In this Sept. 8, 2020 file photo voters line up outside of the Minneapolis early voting center as Minnesota opened early voting for the general election. (AP Photo/Steve Karnowski, File)

Atlas Aegis does not hold a license to provide security in Minnesota, Richard Hodsdon, chairman of the Minnesota Board of Private Detective and Protective Agent Services, a state regulatory board, told the Tribune. Hodsdon said Atlas Aegis told the board earlier this month it was seeking applicants on behalf of another company licensed in Minnesota but refused to provide a name.

In an interview with The Washington Post earlier this month, Atlas Aegis Chairman Anthony Caudle said the company’s client was a “consortium of business owners and concerned citizens” in Minnesota, but declined to name the group. He said the armed veterans would not be visible outside polling places, and, therefore, their presence in the state would not intimidate voters.

“These people are going to be never even seen unless there’s an issue. So it’s not like they’re going to be standing around and only allowing certain people in,” Caudle said. “They’re there for protection, that’s it. They’re there to make sure that the Antifas [sic] don’t try to destroy the election sites.”

He also cited the widespread rioting and civil unrest that broke out in Minneapolis, as well as in cities across the nation, in response to the death of George Floyd in police custody. On Thursday, a judge upheld second-degree murder and manslaughter charges against ex-Minneapolis police officer Derek Chauvin in connection to Floyd’s death, as well as aiding and abetting charges against three others. A third-degree murder charge against Chauvin was dismissed.

Neither Atlas Aegis nor the Minnesota Board of Private Detective and Protective Agent Services immediately returned a Fox News request for comment Thursday.

Meanwhile, the Trump 2020 campaign launched an initiative to assemble an “Army For Trump,” made up of more than 50,000 volunteers across the country to monitor the voting process, especially in key battleground states.

The Minnesota GOP told the Tribune about 3,000 volunteers have registered for training on state election laws, which make it illegal for campaign workers to directly interact with voters by polling places.

This also comes weeks after the FBI announced an alleged plot by members of anti-government militia groups to kidnap Democratic Michigan Gov. Gretchen Whitmer before Election Day, as well as target and kill law enforcement officers and conduct an armed raid on the state Capitol. An FBI agent testified that the suspects also discussed kidnapping the Democratic governor of Virginia.