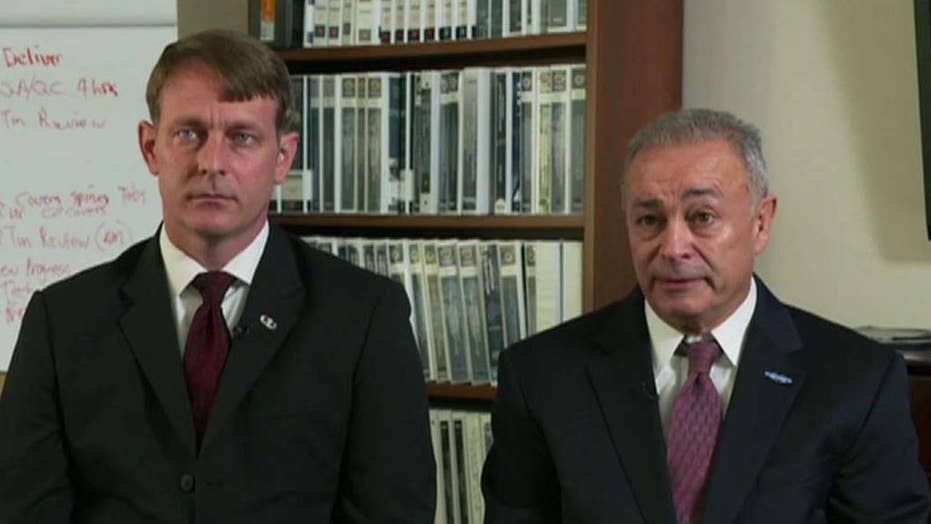 Contractors: We were pressured to keep quiet on Benghazi

Five years after the deadly Benghazi attacks, two contractors tell Fox News' Catherine Herridge that a senior official in the Clinton State Department wanted they to keep quiet because they knew too much #Tucker

EXCLUSIVE: Security at the State Department's Benghazi compound was so dire that another contractor was brought in to clean up the mess just two weeks before the 2012 terror attack – and was later pressured to keep quiet by a government bureaucrat under then-Secretary of State Hillary Clinton, according to two men from the American security company.

Brad Owens and Jerry Torres, of Torres Advanced Enterprise Solutions, say they faced pressure to stay silent and get on the same page with the State Department with regard to the security lapses that led to the deaths of four Americans.

Torres Advanced Enterprise Solutions provides security for U.S. Embassy and consulate personnel around the world in some of the most dangerous locations spanning Africa, the Middle East and South America, according to the firm.

Jerry Torres remains haunted by the fact that specific bureaucrats and policies remain in the State Department after the Benghazi attack despite the change in administrations. "A U.S. ambassador is dead and nobody is held accountable for it. And three guys … all died trying to defend him," said Torres, the company’s CEO and a former Green Beret.

Asked if there was a specific effort by a senior State Department contracting officer to silence them, Torres said, "Absolutely, absolutely."

Owens, a former Army intelligence officer, echoed his colleague, saying those “who made the poor choices that actually, I would say, were more responsible for the Benghazi attacks than anyone else, they're still in the same positions, making security choices for our embassies overseas now."

In 2012, Owens was the American company’s point man in Libya with extensive experience in the region. After the death of Libyan dictator Muammar Qaddafi in the fall of 2011, Owens stressed to Fox News it was well-known that Islamic radicals including Al Qaeda-tied militias were pouring into the region and security “had deteriorated considerably.”

Based on documents reviewed by Fox News, Torres Advanced Enterprise Solutions bid on the Benghazi compound security contract in the spring of 2012. But the State Department awarded the deal to a U.K.-based operation called The Blue Mountain Group.

Owens, who had personally visited the Benghazi compound to assess security, was shocked. "Blue Mountain U.K. is a teeny, tiny, little security company registered in Wales that had never had a diplomatic security contract, had never done any high threat contracts anywhere else in the world that we've been able to find, much less in high threat areas for the U.S. government. They had a few guys on the ground," he said.

According to Torres, the Blue Mountain Group came in 4 percent lower than their bid – and they challenged the decision, claiming the American company should have been preferred over the foreign one.

And there was more: The Blue Mountain Group hired guards through another company who were not armed.

Problems soon arose. One month before the attack -- in August 2012, with The Blue Mountain Group still in charge of compound security -- Ambassador Stevens and his team alerted the State Department via diplomatic cable that radical Islamic groups were everywhere and that the temporary mission compound could not withstand a "coordinated attack." The classified cable was first reported by Fox News.

By Aug. 31, 2012, the situation had deteriorated to the point that Owens and Torres said the State Department asked them to intervene – as Owens put it, an "admission of the mistake of choosing the wrong company."

"They came back to us and said, ‘Can you guys come in and take over security?’ Owens said. “So we were ready.”

But Torres emphasized that time was against them, saying it would have taken two-to-three weeks to get set up.

Twelve days later, the ambassador was killed. Torres learned of the attacks by watching television. He called the circumstances leading up to the tragedy "bad decision-making from top to bottom."

“There was nothing we could've done about it. If we'd had one month warning … who knows what might've happened,” Owens said.

In the chaotic days following that attack, the Obama White House blamed the attacks on an anti-Islam video and demonstration which was not accurate. As a former Green Beret, Torres was stunned: "Coming from a military background, I would expect the administration to tell the truth. So I bought into it for a minute. But I didn't believe it in the back of my mind.” He said they later figured out the video was not the culprit. The attack was a coordinated terrorist assault which included a precision mortar strike on the CIA post in Benghazi.

But as the Obama administration and Clinton’s team struggled to answer questions about the attacks, Visintainer apparently took it one step further -- summoning Jerry Torres from overseas to attend a meeting at her government office in Rosslyn, Va., in early 2013.

Torres took Fox News back to the Virginia office building where he recalled that day's events.

Torres said he was afraid for his company – and hasn’t spoken publicly until now.

"We had about 8,000 employees at the time. You know, we just didn't need that level of damage because these guys, their livelihood relies on the company,” he said. “I trust that our U.S. government is going to follow chain of command, follow procedures, follow protocols and do the right thing."

Another part of that conversation stuck out to Torres. He said Visintainer told him “in her opinion, that guards should not be armed at U.S. embassies. She just made that blanket statement. … And she said that they weren't required in Benghazi. So I was kind of confused about that. And she said that she would like my support in saying that if that came up. And I looked at her. I just didn't respond."

The State Department declined Fox News’ request to make Visintainer available for an interview, or have her answer written email questions.

The Blue Mountain Group did not immediately respond to questions from Fox News.

Torres and Owens said repercussions against their company continue to this day – and that of the 20 security force contracts they’ve bid on since that conversation, they’ve lost 18.

Torres and Owens are concerned another attack like the one in Benghazi could happen again because the same State Department employees responsible for the Benghazi contract remain in place and the contracting rules are outdated.

"In 1990, Congress passed a law that required contracts of this nature to go to the lowest bidder that's technically acceptable," Owens explained. "Now, what that has created is a race to the bottom, is what we call it. So basically, every company tries to cut every corner they can for these contracts."

The men say they are hopeful that changes will come with the Trump administration’s promise to "drain the swamp."

"Let's just say there's been a change at management at Department of State," Owens said. "I feel now that, given that the politics has been taken out of the Benghazi situation, now that there's no longer a candidate or anything related to it, a change of administrations, that actually, we have an opportunity here to fix the problems that made it happen."

On the fifth anniversary, Torres said he thinks about the four families who lost a father, a brother or a son in the 2012 attack, and feels sorry "for not bringing this up earlier. For not actually being there, on the ground and taking care of these guys."

Pamela K. Browne is Senior Executive Producer at the FOX News Channel (FNC) and is Director of Long-Form Series and Specials. Her journalism has been recognized with several awards. Browne first joined FOX in 1997 to launch the news magazine “Fox Files” and later, “War Stories.”