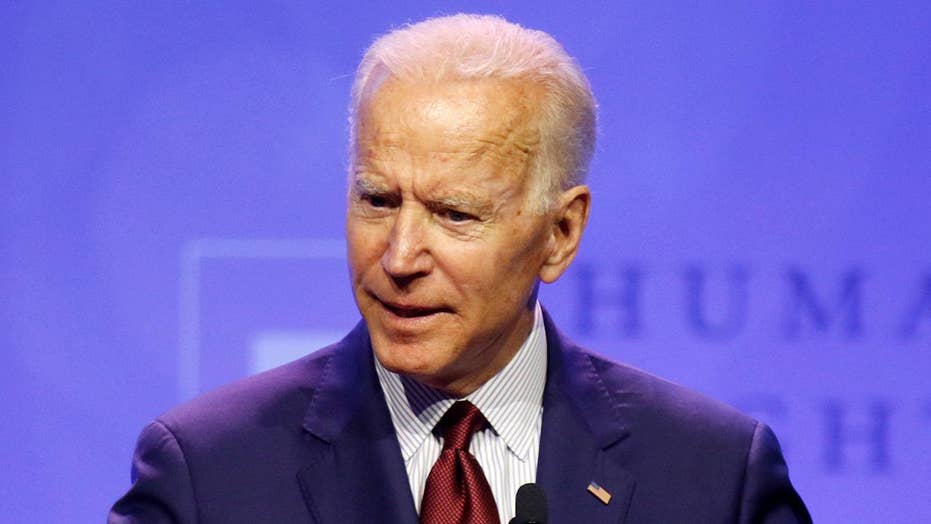 Democratic presidential frontrunner Joe Biden is now a target for those chasing him; Peter Doocy reports from Dubuque, Iowa.

Warning that “we must take drastic action now to address the climate disaster facing the nation and our world,” former Vice President Joe Biden on Tuesday unveiled a wide-ranging plan to combat climate change and transform America’s economy.

Using the Green New Deal as a framework, the clear front-runner right now in the race for the 2020 Democratic presidential nomination announced he’s “calling for a Clean Energy Revolution to confront this crisis and do what America does best – solve big problems with big ideas.”

The price tag for the proposal -- named ‘The Biden Plan for a Clean Energy Revolution & Environmental Justice’ --  is $1.7 trillion over the next 10 years. Biden’s campaign said this would be supplemented by leveraging more than $5 trillion in additional private sector and state and local investments. This is considerably less expensive than the Green New Deal itself, for which cost estimates range as high as $93 trillion.

But it follows criticism from Rep. Alexandria Ocasio-Cortez and others on the party's left flank about his stance on environmental issues. The former vice president vowed he’d pay for the new plan by rolling back the tax incentives in President Trump’s tax cuts that he argued “enrich corporations at the expense of American jobs and the environment.”

Biden, in a statement announcing the plan, emphasized that “more severe storms and droughts, rising sea levels, warming temperatures, shrinking snow cover and ice sheets -- it's already happening. We must take drastic action now to address the climate disaster facing the nation and our world.”

And he warned that “science tells us that how we act or fail to act in the next 12 years will determine the very livability of our planet.”

The unveiling of the 22-page plan comes three weeks after Biden teased he would soon be producing a proposal, as he pushed back against criticism by rising progressive political star and freshman Rep. Ocasio-Cortez of New York that his record on tackling climate change was “middle of the road.”

Biden’s campaign, in spelling out the plan, said that the Green New Deal “captures two basic truths” – that the nation “urgently needs to embrace greater ambition on an epic scale to meet the scope of this challenge,” and that the environment and the country’s economy “are completely and totally connected.”

The Green New Deal, co-authored by Ocasio-Cortez, is a sweeping proposal introduced in Congress earlier this year that aims to transform the country’s economy to combat climate change while enacting a host of new welfare programs.

The Biden campaign said the former vice president’s plan would ensure that the U.S. achieves a 100 percent clean energy economy and reaches net-zero emission no later than 2050. And they said that if elected president, on his first day in office Biden would sign a series of executive orders “with unprecedented reach that go well beyond the Obama-Biden Administration platform and put us on the right track.”

Other parts of the plan include demanding Congress pass a bill in Biden’s first year in the White House that includes milestone targets no later than 2025, make an historic investment in clear energy, climate research and innovation, and “incentivize the rapid deployment of clean energy innovations across the economy.”

The campaign spotlighted that Biden would not only immediately recommit the U.S. to the Paris Agreements on climate change – reversing actions taken by Trump – but would also “rally the rest of the world to meet the threat of climate change.”

The campaign also said that a Biden administration would take action against fossil fuel companies and others “who put profit over people and knowingly harm our environment and poison our communities’ air, land, and water, or conceal information regarding potential environmental and health risks.”

And Biden, long a friend to organized labor, would vow “not to leave any workers or communities left behind” as the nation transforms to a clean energy economy.

Climate change is a top issue in the race for the Democratic nomination, with a number of Biden’s rivals in the historically enormous field of 24 candidates releasing their own plans to tackle climate change.

Last month, Biden past efforts in combating climate change were criticized by Ocasio-Cortez. She tweeted that Biden’s upcoming climate plan “is a dealbreaker. There is no 'middle ground' w/ climate denial & delay.”

A day later, at an event in support of the Green New Deal, she took aim again. Without mentioning the former vice president by name, Ocasio-Cortez highlighted that “if the same politicians who refused to act then are going to try to come back today and say we need to have a ‘middle of the road approach’ to save our lives, that is too much for me.”

“You never heard me say ‘middle of the road.’ I’ve never been middle-of-the-road on the environment. Tell her ... to look at my record. She’ll find that nobody has been more consistent about taking on the environment and a green revolution than I have,” he said during a gaggle with reporters.

And pushing back against his critics, he noted that “this is a long campaign and everybody should just calm down a little bit and take a look at the record from before.”

Biden is back in New Hampshire on Tuesday, and his campaign tells Fox News that the candidate is expected to talk more about his plan during the trip, which includes a stop at a renewable energy supplier in Plymouth.