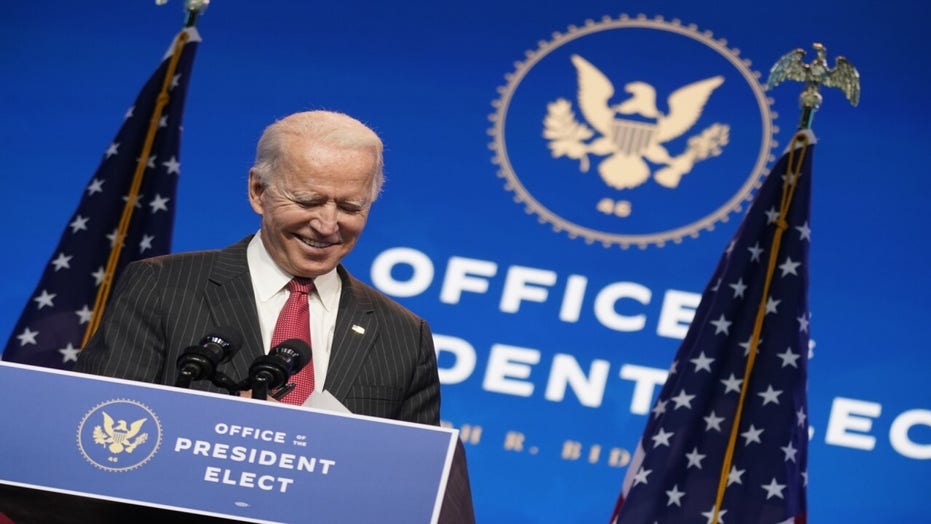 Fox News correspondent Peter Doocy has the latest on the president-elect from Wilmington, Del.

President-elect Joe Biden is urging Congress to quickly pass a COVID relief amid a new surge in the coronavirus pandemic, according to a top Biden transition official.

The messaging came a couple of hours before Biden and Vice President-elect Kamala Harris met on Friday at his transition headquarters in his hometown of Wilmington, Delaware with House Speaker Nancy Pelosi of California and Senate Minority Leader Chuck Schumer of New York, the top two Democrats in Congress.

BIDEN TRANSITION ASKS PROGRESSIVES TO WAIT 'BEFORE THEY PASS JUDGEMENT'

Jen Psaki, who served as communications director in President Obama's White House and is taking a leading role in the Biden transition and steering his eventual cabinet nominees through Senate confirmation, told reporters that Biden, Harris, Pelosi, and Schumer are “in lockstep agreement that there needs to be emergency assistance and aid during the lame duck sessions to help families, to help small businesses. There’s no more room for delay and we need to move forward as quickly as possible.”

Biden told Pelosi and Schumer that “in my Oval Office, mi casa, you casa.”

“I hope we’re going to spend a lot of time together,” the president-elect added as reporters were briefly allowed to witness a portion of the meeting between Biden, Harris, Pelosi and Schumer.

Biden didn’t answer a question that was shouted to him by the press pool before they were escorted out of the meeting, which was his first in-person encounter with Pelosi and Schumer since the presidential election.

Speaking with reporters earlier in the day on Capitol Hill, Pelosi said she and Schumer would be discussing with Biden about the “crushing of the virus” and COVID relief. But months of talks between Pelosi and Senate Majority Leader Mitch McConnell of Kentucky have failed to reach consensus on any relief package.

Following the meeting in Wilmington, the Biden transition announced that the president-elect shared with Pelosi and Schumer “his agenda for the first 100 days of his presidency, including taking aggressive action to contain COVID-19, providing resources to small businesses, families, schools, and state and local governments to power our economic recovery, and investing in the middle class to build back better.”