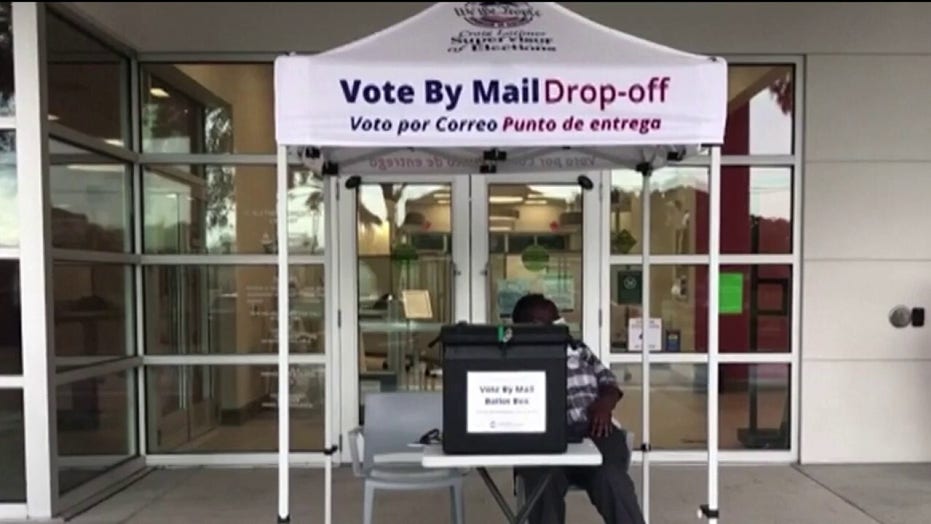 Eric Shawn: They may count the presidential vote…for days

Many Americans are voting early in the 2020 presidential election amid concerns regarding the coronavirus pandemic and U.S. Postal Service timing.

More than 59 million total ballots cast as of Monday morning suggested a record turnout for this year's race compared to the 47.2 million early votes cast in the 2016 election, according to data from the United States Elections Project.

That number of early ballots cast so far represents 43.1% of the total national voter turnout in 2016, and the total number of ballots cast includes more than 40 million mail-in ballots and 19.4 million in-person ballots.

"The numbers are stunning.," said Elections Project founder and University of Florida political science professor Michael McDonald in an Oct. 25 blog post on the project website.

McDonald said that not only are people requesting a record number of ballots, but they are sending them back sooner, giving election workers more time.

"Nationwide, voters will not only be sent an unprecedented number of at least 87 million mail ballots, but they are returning them sooner than in past elections," McDonald wrote. "In all nearly 40 million mail ballots have been returned so far, a return rate of nearly 46%."

"This is good news!" he continued, pointing to worries about whether or not government officials would be able to handle an election during the COVID-19 pandemic. "Yes, there have been problems, and in many places lines are intolerably long," he recognized. "But, people are voting and there are more opportunities for them to do so by Election Day. Americans’ resilience and support for their democracy is very heartening in these trying times."

Voters line up and wait to cast a ballot at the American Airlines Center during early voting Thursday, Oct. 15, 2020, in Dallas. (AP Photo/LM Otero)

McDonald previously told Fox News that he "expected some things to be different since states changed their laws" to accommodate voters amid the pandemic. More than 87 million absentee ballots have been sent to voters so far this year.

"People did not have to take advantage of this," he said of mail-in ballots and early voting. But many people already have.

California, however, has recorded the highest number of mail ballot requests at nearly 21.9 million compared to Florida's 5.9 million as of Sunday morning. Voters in New Jersey have requested more than 6 million. Ballot request data remains unavailable in New York.

An employee of the Philadelphia Commissioners Office examines ballots at a satellite election office at Overbrook High School in Philadelphia. (AP Photo/Laurence Kesterson)

Those ballot requests by party, however, may not be an accurate indicator of final election results, according to McDonald's frequently asked questions page on the Elections Project website.

McDonald noted that "[t]he election is not over yet, not by a long shot. There is still a little more than a week before the election, and Election Day itself to go."

Colorado, Hawai'i, Oregon, Utah and Washington send mail-in ballots to every registered voter, and California, D.C., Montana, Nevada and New Jersey did the same this year as an alternative to voting in person during the COVID-19 crisis.