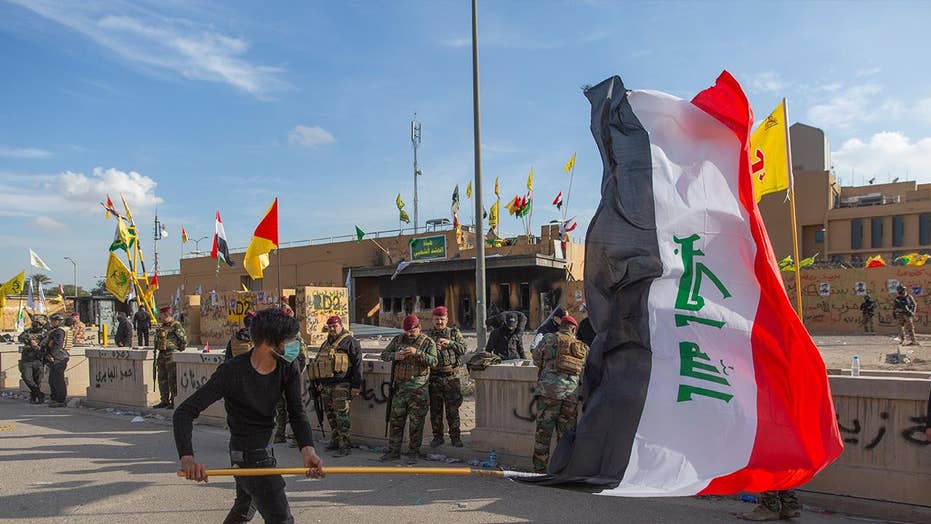 Iran regime ‘should fire all their advisers’: National security expert

As someone who has deployed to foreign soil, I know how important it is to have a commander in chief that has your back. President Trump has communicated in the last few days to Americans across the world: “I have your back.” Americans are safer today because Iran's Gen. Qassem Soleimani is dead.

Let’s take a step back, though, and evaluate what’s really going on here. The president isn’t merely reacting to Iranian provocations or recklessly barreling toward a tit for tat that will end in World War III. The president’s recent actions are part of a coherent strategy toward Iran. And that strategy is working.

The president’s Iran strategy includes three prongs: an economic prong, a diplomatic prong and a military prong. The president will continue to apply maximum pressure to Iran until it starts acting like a normal nation. To become a normal, peace-seeking nation, Iran's leaders need to agree to do two very simple things.

First, stop funding terrorists. Iran-funded terrorists have not just killed Americans, but also Muslims in Iraq, Syria and Lebanon, Christians in the Nineveh Plains as well as Jews living in Israel.

Second, stop pursuing nuclear weapons. No nation should have access to nuclear weapons when it threatens to wipe other nations off the face of the Earth. Once Iran begins acting like a peaceful nation, the regime should come to the table and strike a deal with the president and Secretary of State Mike Pompeo.

But it seems that the extremists in Iran's regime won’t easily let go of their "evil empire" aspirations. As a result, their country is collapsing under the weight of the president’s economic prong.

Iran’s economy shrank nearly 10 percent in the last year, and its inflation rate in 2019 was 40 percent. The sanctions have reduced Iran's revenue by at least $10 billion since last November.

It’s become so bad, that the Iranian people took the streets to protest their government in November. Tehran chose to respond by slaughtering at least 1,500 innocent people.

So why is Tehran holding on? Why wouldn’t leaders of the nation simply realize their backs are against the wall? It’s because they have learned through dealing with prior administrations that if they rattle their saber enough, they will be rewarded with appeasement and pallets of cash. So Tehran uses proxies and orders terrorists like Soleimani to lash out and threaten American lives.

Tehran now knows that saber-rattling won’t phase Donald Trump. He has shown Iran that he will defend American lives, and he will respond to provocations by delivering consequences swiftly and decisively.

After all, the Iranian military is no match for the American armed forces. Iran knows better than to push the U.S. towards full escalation. Our annual defense budget is 37 times larger than Iran's.

We use 5th generation F-35s, advanced munitions, and possess technological capabilities the Iranians cannot even fathom. We have incomparable advantages when fighting a country that ranks 29th on annual defense spending. And, of course, Tehran remembers how Ronald Reagan successfully destroyed half of the Iranian navy in just one day during Operation Praying Mantis, losing only one U.S. helicopter.

The Iranians won’t pick a fight with Trump. What they might do is wait for the withering crop of Democratic candidates and lobby Trump’s November opponent for some relief.

After all, the members of the Democratic field have no intelligible Iran strategy except reverting to the Joint Comprehensive Plan of Action (JCPOA), otherwise known as President Obama’s Iran Deal. Pete Buttigieg delivered a substance-free speech at Indiana University this summer explaining the centerpiece of his foreign policy would be to rejoin the JCPOA.

Obama’s Iran Deal not only failed to prevent Iran from funding terrorism, it freed up $100 billion for Iran to sponsor terrorism across the Middle East and the globe. We sent an additional $400 million to Iran in ransom money via a cargo plane.

The deal also failed to prevent Iran’s pursuit of nuclear weapons. Long before Trump backed out of Obama’s Iran Deal, Tehran exceeded the amount of heavy water it could have under the deal, and an independent watchdog found radioactive material in a warehouse in Iran. These were obvious signals that Tehran was already breaking the terms of the deal and developing nuclear technology anyway.

President Trump’s strategy is working, and Iran knows it. Now Democrats need to realize it and get out of his way.