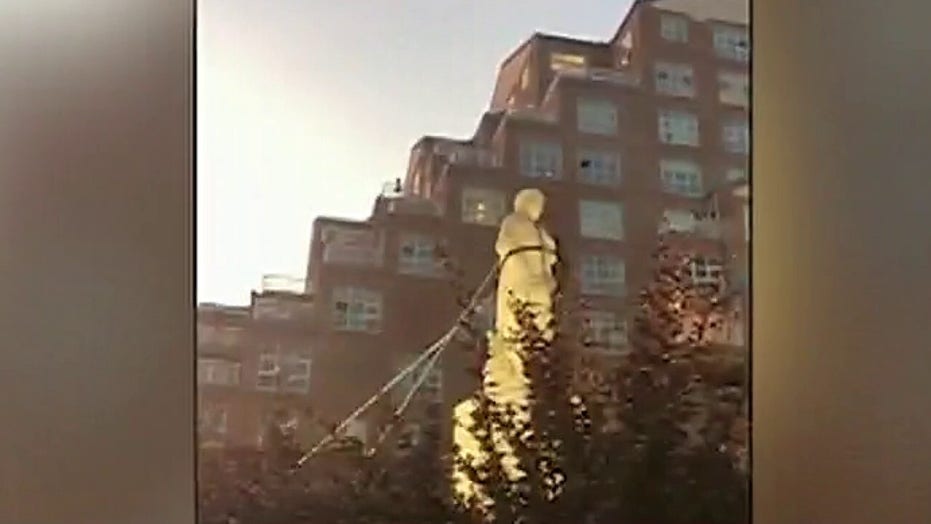 Rioters in Baltimore pulled down a statue of Christopher Columbus and then tossed the statue into the city’s Inner Harbor.

On Tuesday, Boston city officials voted to remove its Emancipation Memorial from public land. The statue, which depicts Abraham Lincoln and a kneeling freed slave, has been situated in a popular park near Boston Common since 1879.

Since the tragic death of George Floyd, far-left activists across the country have been demanding cities, states, universities and private property owners strip their land and institutions of all statues and other honors that allegedly depict racism or celebrate people who held views considered to be racist, even the “Great Emancipator” himself, Lincoln.

Although some of these protesters say their motivation is racial justice and equality under the law – goals everyone should embrace – the reality is that many of the leaders calling for the destruction of statues like the Emancipation Memorial are motivated by Marxist and socialist ideology, not by a well-meaning pursuit of racial harmony.

This isn’t a theory. It’s a well-established fact.

For example, in June, a video surfaced showing Black Lives Matter co-founder Patrisse Cullors admitting she and other members of the organization are “trained Marxists.” Additionally, the Movement for Black Lives, a well-funded Black Lives Matter organization, bluntly states on its website, “We are anti-capitalist. We believe and understand that Black people will never achieve liberation under the current global racialized capitalist system.”

It’s Marxists’ desire to overthrow capitalism and paint America – along with all of its founding principles and beliefs – as hateful and racist that is really motivating so many of the most radical rioters across the country. Racial justice is merely the façade behind which Marxists are hiding.

The destruction of the Emancipation Memorial illustrates just how unimportant racial equality really is to the Marxist leaders of these groups.

The Boston statue is a copy of the famed Emancipation Memorial in Washington, D.C., which protesters are also attempting to tear down. It celebrates the end of slavery and Lincoln’s role in helping that momentous achievement occur.

Incredibly, freed slaves paid for the Washington statue, and Frederick Douglass, one of the most important black civil rights leaders in American history, delivered a speech at the memorial’s dedication in 1876, during which he said the memorial was a “good work for our race” because, in part, building the statue was “doing honor to the memory of our friend and liberator.” He also said the statue would provide the “highest honors to ourselves and those who come after us.”

How can a statue celebrating the emancipation of slavery, paid for by former slaves and dedicated by one of the most important black leaders in history – himself a former slave – ever be considered racist against blacks?

Vandalizing and beheading statues of George Washington, burning down police stations, looting department stores and removing memorials built by former slaves serve no purpose for those who truly care about racism and seek racial equality. They are, however, quite useful actions for those who wish to foment a socialist revolution.

The most obvious explanation for the growing socialist movement in the United States is that, for decades, socialists and progressives have been in charge of America’s public schools and colleges.

The real cause for concern here isn’t that there are radical leftists who want to destroy the American way of life. They have had a presence in the United States for more than a century. The most disturbing aspect of these events is that so many well-meaning people have been duped into joining them and have been convinced that our country has never been anything other than a bastion of hate, racism and greed, and that the only way to right those wrongs is to eliminate capitalism.

The most obvious explanation for the growing socialist movement in the United States is that, for decades, socialists and progressives have been in charge of America’s public schools and colleges. They have taught historical revisionism, rejected the value of free-market capitalism and done everything in their power to indoctrinate a whole generation of young people into believing our nation’s founding principles are rotten to the core.

In study after study, researchers have shown there is a strong slant to the left in education, and the further one pursues education, the worse the bias gets. Neil Gross, a self-confessed left-wing academic who has argued extensively (and unconvincingly) that professors are not indoctrinating kids, reports that professors are “about three times more liberal on average” than other U.S. adults.

Education at the K–12 level isn’t much better. A 2017 study by the Education Week Research Center found just one-quarter of teachers, principals and superintendents identify as Republican.

And these figures only scratch the surface. Left-wing teachers’ unions – which hold significant political power that they use to impact local, state and national public policy, including curriculum standards – are closely aligned with Democrats and liberal organizations.

In the 2019–20 election cycle, more than 99 percent of the American Federation of Teachers’ political contributions went to Democrats or liberal groups.

With these biases in mind, it’s no wonder that America has been slowly transformed into a nation that would tolerate the desecration of its greatest heroes, most of whom would be classified as conservative by today’s standards.

Nor should it be surprising that about half of all young people now say they have a favorable view of socialism, despite its long and tragic history of failure, starvation, oppression and bloodshed.

What is truly mystifying, though, is that Republicans have known about this problem for a half-century and have done virtually nothing to fix it.

Curriculum standards and college faculty are still controlled by leftists, even in the most conservative states.

Right-leaning organizations have been developing and calling for school choice programs for many years, yet few substantial programs exist in most of the United States, including in areas long controlled by Republicans.

Republicans’ failures can’t be blamed on voters, either. The overwhelming majority of parents say they support school choice programs, whether they identify as Republican, Democrat or independent, and across all racial groups.

The Republican Party has failed conservatives, libertarians and, most importantly, America’s children. And the worst part is, we’re just starting to see the greatest effects of that failure. Unless our education system is completely overhauled, the problem is only going to get worse, a truly terrifying thought, indeed.

How much more chaos do Republican politicians need to see before they finally take action?

Justin Haskins is the executive editor and a research fellow at The Heartland Institute and the editor-in-chief of StoppingSocialism.com. He's the author of "Socialism Is Evil: The Moral Case Against Marx's Radical Dream." Follow him on Twitter @JustinTHaskins.