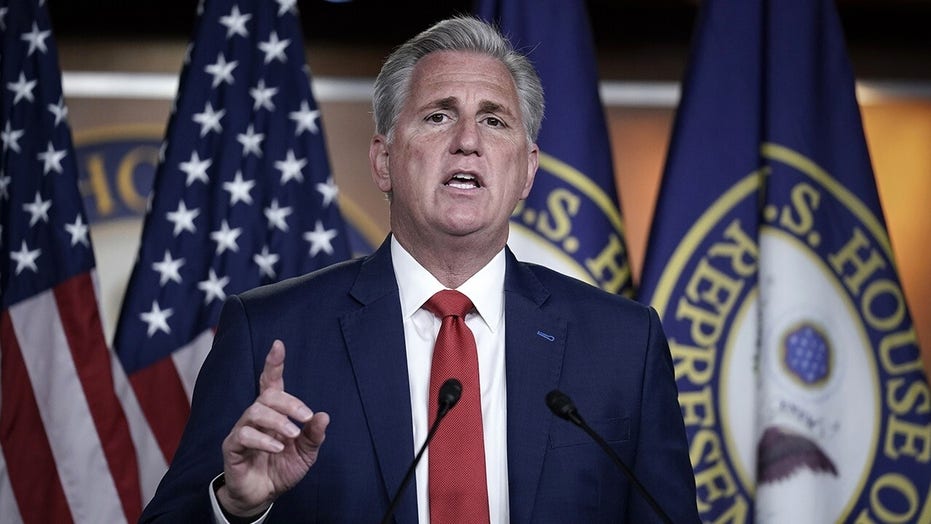 Fox News contributor Newt Gingrich weighs in on the power struggle between House Speaker Pelosi and the progressive wing of the Democratic Party on ‘America’s Newsroom,’

As House Democrats try to understand why their expected gains in this month’s election turned out to be substantial losses, they should take a minute to reflect on the disastrous results of the 1994 and 2010 midterm elections — the last midterm elections after new Democratic presidents were elected.

In 1994, I led the House GOP as we won a majority for the first time in 40 years. At the ballot boxes, the American people repudiated the Democrats’ left-wing policies, including tax increases, a huge health care proposal (HillaryCare), and efforts at gun control. Their vote was also a statement against President Bill Clinton’s dramatic shift to the left after he had campaigned as a moderate, but then went along with the left-wing of Congress as president.

In 1994, Republicans gained 6.4 percent to earn 51.5 percent of the total vote, while the Democrats dropped 5.4 percent to end up with a total of 44.7 percent of the vote. I went from minority whip to speaker of the House, while Democratic Speaker Tom Foley of Washington state was defeated for reelection.

While the Republicans had not been reelected as a majority since 1930 (64 Years) we established a reputation for keeping our word with the Contract with America. Reforming welfare, passing the largest capital gains tax cut in history, reforming the Food and Drug Administration, overhauling federal communication laws, and balancing the budget for four straight years gave House Republicans enough support from the American people to hold the majority for 12 years.

In the second midterm election during the term of President George W Bush, the House Republicans collapsed. With an aggressive campaign led by then-Minority Leader Nancy Pelosi of California, House Democrats earned 52.3 percent of the vote and gained 31 seats. However, the House Democratic victory lasted only four years.

Two years after President Barack Obama was elected, the left-wing Democratic policies on taxes, social issues, and health care led to a sharp return for the House Republicans. In 2010, Republicans gained 9.1 percent of the vote to a total of 51.7 percent, while the Democrats were down 8.3 percent to 44.9 percent of the vote.

This month’s House elections may prove to be a harbinger of things to come. The Democrats and their left-wing media allies had been cheerfully predicting that they would gain 15 seats or more because of President Donald Trump’s unpopularity.

Instead, the brilliant recruiting by Republican Leader Kevin McCarthy of California and his team (including Whip Steve Scalise of Louisiana, Conference Chair Liz Cheney of Wyoming, National Republican Congressional Committee Chair Tom Emmer of Minnesota, and Rep. Elise Stefanik of New York) and the resources they amassed to offset the Democrats led to a House Republican gain of eight seats, so far – and potentially more.

Pelosi is now being forced to try to lead the House with (currently) a 222-205 lead. Republicans appear to be leading in the undecided races in California, Iowa and New York. We will see about the race in Louisiana's 5th Congressional District. If these races go as expected, the House will have a 223-212 Democratic majority. That means losing six Democratic seats in 2022 will give Kevin McCarthy and Republicans control of the floor.

In a similar circumstance in 1998, when Republicans expected to gain 15 seats during the impeachment of President Clinton but instead lost five seats, I resigned because the House GOP conference was deeply disappointed in the outcome. They were afraid of sliding into the minority. Four years of being chairpersons rather than ranking members had taught them the value of majority status.

Now Pelosi must face a Democratic caucus whose members have not yet absorbed that they control far fewer seats than they had expected the day before the election. The Democrats who care about being in the majority must ask themselves what they need to do to survive as a majority when the historic precedents indicate they will have a disastrous 2022.

As a sign of the remarkable House Republican dominance at the polls, the Cook Political Report had listed 27 House races as “toss-ups” because they were too close to predict. Of those 27 House races, Republicans won every single one. They also won every GOP-leaning race.

Even more exciting for long-term House Republican supporters like me, these victories came with a much broader and more competitive set of candidates.

As columnist Henry Olsen wrote in The Washington Post: “At least 33 House Republicans will be either women or non-White when the new body sits in January. This includes 27 women, six Hispanics, and two Black men, Burgess Owens of Utah and Byron Donalds of Florida. They come from all regions of the country and represent urban, suburban and rural seats.”

“In fact, every seat Republicans have flipped from blue to red has been captured by a woman or a minority” Olsen wrote. “This wasn’t an accident. Aided by efforts by the National Republican Congressional Committee and Rep. Elise Stefanik (R-N.Y.), GOP officials strenuously tried to recruit capable female and non-White candidates for as many pickup opportunities as possible. These efforts could bear even more fruit, as two other women and one Hispanic — Mariannette Miller-Meeks in Iowa, Claudia Tenney in New York and Mike Garcia in California — might still win the seats they are contesting.”

The story of a positive, inclusive, idea- and solution-oriented House Republican Party is going to make both candidate recruitment and fundraising much easier.

As donors and supporters realize how close we are to a Speaker McCarthy era, his ability to recruit candidates and to fund those candidates is going to go up dramatically.

Conversely, Speaker Pelosi will increasingly be seen as embattled in a House she presides over but cannot lead. She will be hamstrung by her narrow partisan margin — and by the deep and increasingly angry split between the radical wing and the moderates (who know that socialism and the Green New Deal are going to defeat Democrats if these principles define them).

Finally, just as President Trump drove Democrats together and gave them a common focus of their energy, the Biden-Harris administration and its radical appointees (most of them politically unaware of how destructive their views are outside their own circles) will make it much easier for House Republicans to hang together.

I don't know if the House Democratic losses in 2022 will be as big as 1994 or 2010, but I am convinced they will be big enough to make McCarthy the next speaker of the House.

Former Speaker of the U.S. House of Representatives Newt Gingrich is the host of the "Newt’s World" podcast and author of the New York Times bestseller "Trump and the American Future." More of his commentary can be found at www.Gingrich360.com