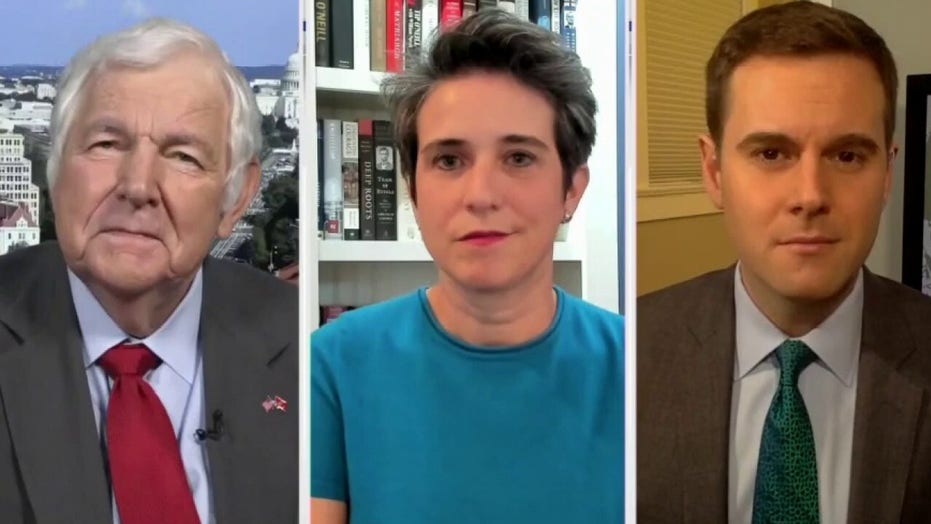 MSNBC is being accused of "cropping" what appears to have been a script that Joe Biden had during his virtual chat with his newly-announced running mate, Sen. Kamala Harris, D-Calif.

In a photo released by the Biden campaign, the presumptive Democratic nominee is seen at his desk talking to Harris on a laptop while holding up an iPhone, though upside down as some observed.

However, critics highlighted the sheet of paper laying on the desk that shows a script of why Biden chose his former 2020 rival.

BERNIE SUPPORTERS, PROGRESSIVES TRASH BIDEN-HARRIS TICKET: A 'MIDDLE FINGER' TO THE BASE

"I've decided I would like you to join this effort to win back the soul of our country and be our nation's next Vice President," the visible text reads. "I think you are entitled to know why I chose you. There are three reasons."

GOP rapid response director Steve Guest among others later pointed out that those notes were not seen in MSNBC's airing of the photo.

"MSNBC cropped the photo of Joe Biden video chatting with Kamala Harris, removing Biden’s talking points from the image," Guest tweeted. "It’s an embarrassment Biden needed talking points to talk to his own VP. Biden is clearly a puppet of the left."

MSNBC did not immediately respond to Fox News' request for comment.

Last month, Biden was seen at a press conference holding notes about Harris, fueling suspicion that he was choosing her as his vice president.

Harris is the first Black woman on a major political party’s presidential ticket. The Biden campaign said Biden and Harris will deliver remarks together on Wednesday in Wilmington, Del.

"I’ve decided that Kamala Harris is the best person to help me take this fight to Donald Trump and Mike Pence and then to lead this nation starting in January 2021," Biden said in an email to supporters.

Biden also tweeted: "I have the great honor to announce that I’ve picked @KamalaHarris — a fearless fighter for the little guy, and one of the country’s finest public servants — as my running mate."

"Back when Kamala was Attorney General, she worked closely with [Biden's son] Beau. I watched as they took on the big banks, lifted up working people, and protected women and kids from abuse. I was proud then, and I'm proud now to have her as my partner in this campaign."