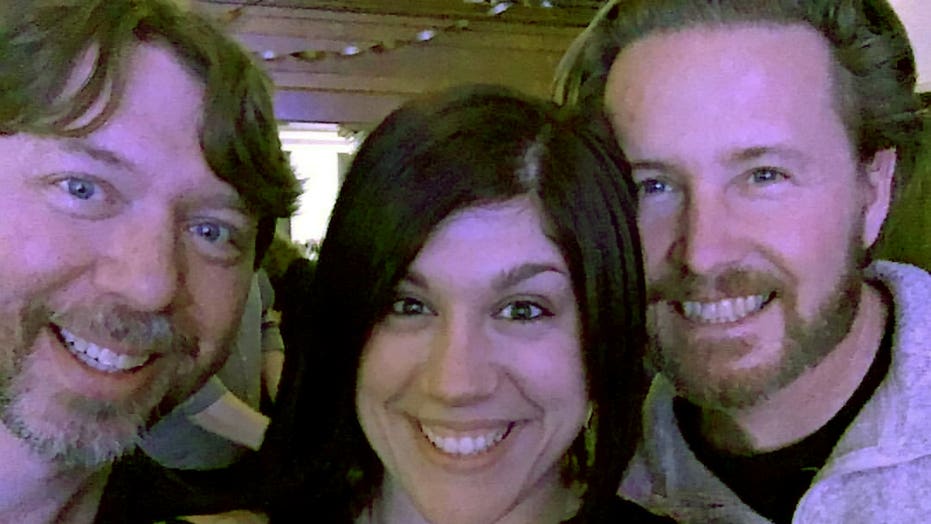 Talk about a full house.

Lindsay Taylor, 35, lives with her ex-husband Chris Kelley, 38, her current husband Mike, 52, and her four children -- all in the same house in Putnam, Connecticut.

In fact, Lindsay, Mike and Chris recently bought a new house together that they’ll all be moving in to.

They recently spoke with SWNS’s Real Fix podcast, explaining why they moved in together and how it’s been going.

After six years of marriage, Lindsay and Chris got divorced in 2016. However, they remained friends and co-parented their two children, Joanna and Lucas, who are now 5 and 7 years old.

Lindsay Taylor (middle) is pictured with her ex-husband Chris Kelley (back left) and her current husband Mike Taylor (right) and two of her children, Lucas (front left) and Harrison. (SWNS)

That same year, Lindsay met Mike and they quickly fell in love.

They moved in together in an apartment near Chris’s house, so Lindsay could help raise their children. However, they soon found out the apartment was in foreclosure and they were forced to move out.

WOMAN REMARRIES HUSBAND WITH DEMENTIA AFTER HE FORGOT ABOUT FIRST NUPTIALS

That’s when Chris stepped in and offered to let the new couple move into his five-bedroom house with his and Lindsay’s children.

“The stars aligned and Chris was just like, come move in, let’s just do it,” Lindsay told the Real Fix.

“It just felt like the right thing to do at the time,” Chris explained. “We had a child that was sick and I just felt like he needed his mother here as well and I just wanted to make it work at whatever cost.”

For Mike, the move-in was a bit uncomfortable at first.

“Of course it felt awkward - I said to him, ‘if I was in your shoes I don’t think I could have done the same thing,’” he said about Chris.

“But everything went a lot smoother than we thought it would,” Mike added, saying that now he feels comfortable with the arrangement.

Aside from Lindsay, Mike, Chris, Joanna and Lucas, they also live with Lindsay’s eldest daughter from an earlier marriage, Rachel, 19, and Lindsay and Mike’s 3-year-old Harrison.

Mike also has two grown children, he told the podcast.

One of the main reasons they decided to move in together was because Lucas, Lindsay and Chris’s son, has chronic granulomatous disease, or CGD, a rare immunodeficiency disorder.

Three years ago, Lucas underwent a bone marrow transplant in an attempt to cure his disorder.

However, after the operation, Lucas -- and by extension, everyone in his family -- had to isolate for two years. Even now, the family has to be careful about keeping Lucas healthy.

“Lucas’ immune system is so fragile right now that we need to limit his exposure to the outside world, and this means as a family we need to do this as well,” Lindsay said. “It’s a big sacrifice that everyone is making but hopefully it will all be for the best when Lucas gets better.”

Ultimately, the unique living arrangement has worked well -- leading Lindsay, Mike and Chris to buy a new house that they can all live in together, instead of splitting up and going their separate ways.

“Everything we’ve done has been for the kids and if there’s one thing I’ve learned, it’s that anything, no matter how ridiculous it may sound, is possible, if you try hard enough to make it work,” Lindsay added.