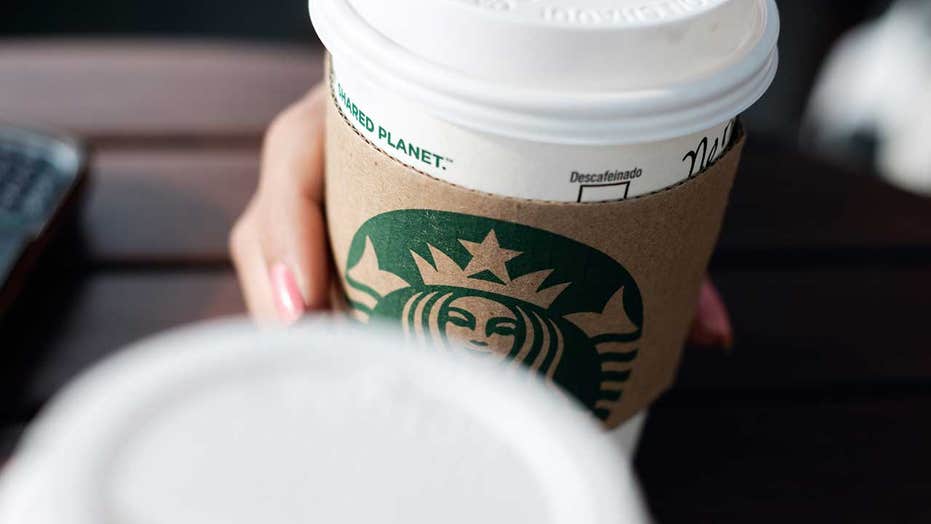 Starbucks changing up cafe layouts in wake of coronavirus pandemic

A Starbucks barista in San Diego County is being praised for how she handled a disruptive customer who repeatedly refused to wear her mask and then shouted “f--- Black Lives Matter” as she was leaving the store.

Alex Beckom, 19, shared footage of the incident to her TikTok and Facebook accounts on Sunday, captioning the video with “This was my day at work.”

In the clip, Beckom is seen attending to two separate customers, one of whom is wearing her mask and another who appears to have her mask around her chin. By Beckom’s own account, the woman without the mask had initially walked in wearing her face covering, but lowered it to order from a co-worker.

Beckom claims she merely asked the woman to replace the mask over her face, which she allegedly did, before again removing it and becoming disruptive.

The video starts with the disruptive woman telling Beckom that she won’t “listen to anything you say when you talk to me like that, and I know it’s because you’re discriminating against me because I’m a Trump supporter.”

Beckom responds with a friendly, “OK, sure.”

The woman then says “f--- Black Lives Matter” before asking Beckom for both a straw and sugar, which Beckom provides. And just as the disruptive woman is accepting the sugar, Beckom reminds her to once again wear a mask inside Starbucks.

“And again, next time you come in, I’m gonna need you to keep your mask on or else I can’t help you,” says Beckom, following Starbucks’ storewide policy.

The woman then appears to become agitated, claiming “it’s not a law” that she has to wear a mask, saying, “I can show you the penal code and everything. It’s a hoax. I don’t have to wear a mask. I’m not going to wear a mask.”

The woman soon leaves the shop, only to return to the door to shout “f--- Black Lives Matter.”

In a statement provided to Fox News, a spokesperson for Starbucks said the woman's behavior "is not welcome in our stores," and added that the company is currently focusing on "providing support to our partner who demonstrated tremendous composure during a very difficult interaction."

Starbucks' own policy, meanwhile, requires all customers in the United States to wear “facial coverings when visiting our stores.” San Diego County, too, currently requires residents to wear face coverings when shopping in stores, when waiting in line at stores, or when picking up food, as well as in several other public settings.

"We expect our partners and customers alike to foster a welcoming Third Place environment, and this聽behavior聽is not welcome in our stores," a spokesperson for Starbucks said in a statement shared with Fox News. "Our focus right now is providing support to our partner聽who demonstrated tremendous composure during a very difficult interaction." (iStock)

Beckom later told KGTV that she never mentioned politics to the woman, who entered the Santee location wearing a mask printed with “Trump 2020.”

“If she thinks she’s being discriminated against, that’s on her,” Beckom told the station. “I never brought up anything about her politics… I wasn't even angry. I was just like, ‘Why is this happening?’"

On Facebook, Beckom also asked her followers why the woman felt the need to bring up the Black Lives Matter movement during an exchange about masks, although one commenter said, “I’m sure we can guess.”

“If the barista was white would she have brought up BLM?” another commenter asked.

Most of the other responses were also quite supportive of Beckom, with many praising her for keeping calm.

“I’m proud of you girl. You handled that WAYYY better than I would have,” wrote one woman.

“You chose to de-escalate — I’m proud of you, my friend,” another commenter wrote, in part.

Beckom later claims that the disruptive customer reposted the video to her own Instagram account, saying she intended to sue Beckom for “libel/defamation” and citing a California penal code against distributing digital images with the intent to bring harm on another person or their family.

Beckom did not immediately respond to a Fox News request for further comment.