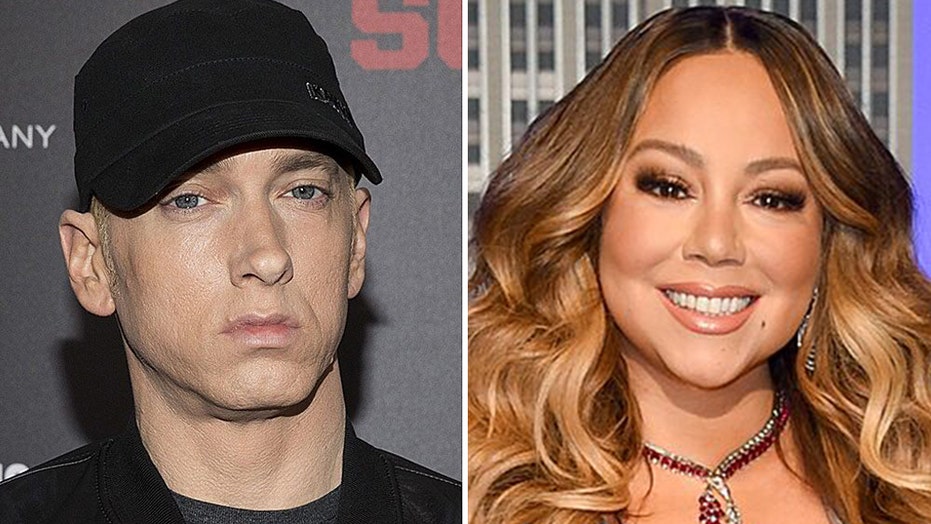 Eminem is gearing up for intense reminiscing ahead of the pending release of Mariah Carey’s upcoming memoir.

The “Lose Yourself” emcee – whose real name is Marshall Mathers – reportedly dated the “Emancipation of Mimi” songstress in the past and word has it that the real Slim Shady, 47, is expecting Carey, 50, to divulge on their relationship.

“Eminem’s Achilles heel has always been Mariah Carey. They had a very toxic relationship,” a source claimed to Us Weekly on Thursday. “He knows that Mariah is going to say very negative things about him. He is expecting the onslaught, and almost welcomes it.”

The 15-time Grammy winner and Carey certainly aren’t strangers to trading public jabs and both have referenced each other in records.

Eminem traded lyrical jabs with Carey and her then-husband Nick Cannon, 39, – with whom she shares two 9-year-old twins – on his song “Bagpipes From Bagdad.”

Carey even dedicated an entire song called “Obsessed,” released in 2009, in which she croons “Why you so obsessed with me? Will the real MC please step to the mic?” The MC is seemingly a play on the rap term “emcee” and the singer’s initials.

The Detroit native has also previously mentioned Carey in “Superman” and “When the Music Stops,” both songs that appeared on his 2002 album release, “The Eminem Show,” which garnered him a Grammy win along with another nomination.

Furthermore, the insider relayed to the outlet that the notoriously private Eminem is pulling his hair out over details he doesn’t want out -- specifically centered on their love life.

MARIAH CAREY REVEALS HER MEMOIR IS COMPLETED: 'IT TOOK ME A LIFETIME TO HAVE THE COURAGE'

“Marshall is stressed out that Mariah is going to say s--- that he was bad in bed or a selfish lover because he has always been very insecure about that,” the source alleged. “She knows that.”

At the time of his 2002 release, Eminem opened up in an interview with Rolling Stone that he “didn’t want to say anything disrespectful” about Carey “because I respect her as a singer.” In the same breath, he added, “but on the whole personal level, I’m not really feeling it. I just don’t like her as a person.”

Maintained the rapper of the five-time Grammy winner: “I gotta be honest; I learned a lesson from it: Don’t believe the hype. I have respect for her, but she doesn’t really have it all together. I’ll just say that and that she’s a beautiful woman.”

In response to the “8 Mile” actor, Carey subsequently denied the pair even shared a relationship and appeared to reference him in a song titled, “Clown.”

In the years-long schism, the Shady Records head honcho also released “The Warning” in July 2009 and sent unveiled insults at Carey while speaking directly to Cannon.

However, Eminem's most recent shot at Carey came in Dec. 2019 when he rapped on Fat Joe’s record “Lord Above” and said Cannon was “whipped” and “neutered,” suggesting he caves to Carey’s demands.

“I know me and Mariah didn’t end on a high note / But that other dude’s whipped, that p–y got him neutered,” he rapped. “Tried to tell him this chick’s a nut job before he got his jewels clipped / Almost got my caboose kicked, fool, quit, you not gon’ do s---. I let her chop my balls off, too ‘fore I lost to you, Nick.”

Carey’s memoir, “Meaning of Mariah Carey,” is slated to drop on Sept. 29.

Representatives for Carey did not immediately respond to Fox News' request for comment.