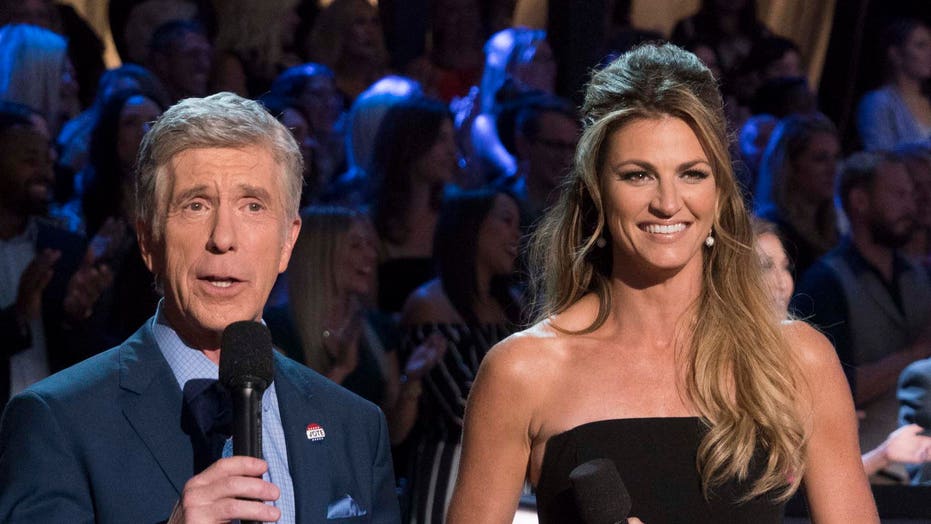 “Dancing with the Stars” fans are still up in arms over the ousting of longtime hosts Tom Bergeron and Erin Andrews.

The social media accounts for the reality competition just shared a teaser on Monday ahead of the announcements for which celebrities will be waltzing and foxtrotting their way into bliss on Season 29 and the latest post was immediately met with pent up emotions regarding Bergeron and Andrews’ exits from the show in July.

“Nope, sorry ... don't care if Tom's not there!” one Twitter user fired back in response to the “DWTS” post that used emojis to coincide with the chosen celebrity cast.

Another wrote, “I’m not happy at all about the host change. But I will be watching to support the pros and the new celebs! I don’t want the show to fail."

FORMER ‘DANCING WITH THE STARS’ HOST TOM BERGERON IS ‘CONFIDENT’ HE’LL BOUNCE BACK AFTER BEING LET GO: REPORT

And an additional longtime viewer vowed, “For the first time, this household will not be watching – no Tom no viewers in this house.”

“Don’t know. Don’t care,” echoed another fan in response. “Won’t watch the show but will watch the ratings plummet. Bring back @Tom_Bergeron.”

The “DWTS” community was floored in July when Bergeron to announced on Twitter  that he won’t be returning to host the competition dance show. He had held the post since its debut in 2005. It was also revealed that co-host Erin Andrews, who got her start as a contestant in 2010, won’t be back as the show goes in a different direction with new host Tyra Banks.

“Just informed @DancingABC will be continuing without me,” he wrote. “It's been an incredible 15 year run and the most unexpected gift of my career.  I'm grateful for that and for the lifelong friendships made.  That said, now what am I supposed to do with all of these glitter masks?”

In a statement provided to Fox News, a representative for the 65-year-old comedian explained that the move was ultimately the network’s call.

“ABC opted not to pick up Tom's option," the rep said in a statement. "In the fine tradition of Hollywood cliches, they're ‘Going in a different direction.’”

Former contestants have come out in droves and have expressed their support for Bergeron and Andrews while sending well wishes to Banks.

“I’ve texted back and forth with Tom. I would’ve never made that decision, obviously. I think Tom and Erin are the backbone of the show,” former “DWTS” champion Alfonso Ribeiro, 48, told Us Weekly when news of the exits circulated. “I have no idea where they’re going to go and what changes they want to make and why and how these decisions were made. But I think people like myself will absolutely miss Tom and Erin. It’ll be hard for me to see the show in whatever new form it is.”

Derek Hough, a former pro dancer on the show said he was “pretty shocked” by the news but said nothing in Hollywood is guaranteed.

"My initial reaction — I guess I was pretty shocked. Tom Bergeron is such a staple of 'Dancing with the Stars,' and he's a good friend of mine. We're friends, and he's a good man and he's been there since the beginning, and he's just a great guy," Hough,35, told Bevy Smith on her radio show "Bevelations" about the recent shakeup in casting.

"But you also understand that we're in the entertainment industry, nothing is certain, and there's always these efforts to reinvigorate and switch things up. So, you look at that and go, that's also understandable, I think."

Former 'DWTS' champion Alfonso Ribeiro said it will 'be hard for me to see the show in whatever new form it is.'<br data-cke-eol="1">

Hough appeared on the ABC series for 17 seasons and won the Mirrorball six times. He’s since become a judge on NBC's "World of Dance" with Jennifer Lopez.

Last week, Backstreet Boys star AJ McLean, 42, confirmed he would be joining on as one of the celebrity shakers.

McLean told Good Morning America his two daughters, ages 3 and 7, are very excited to see him on the ABC competition series.

"They are stoked -- especially my oldest," he said.