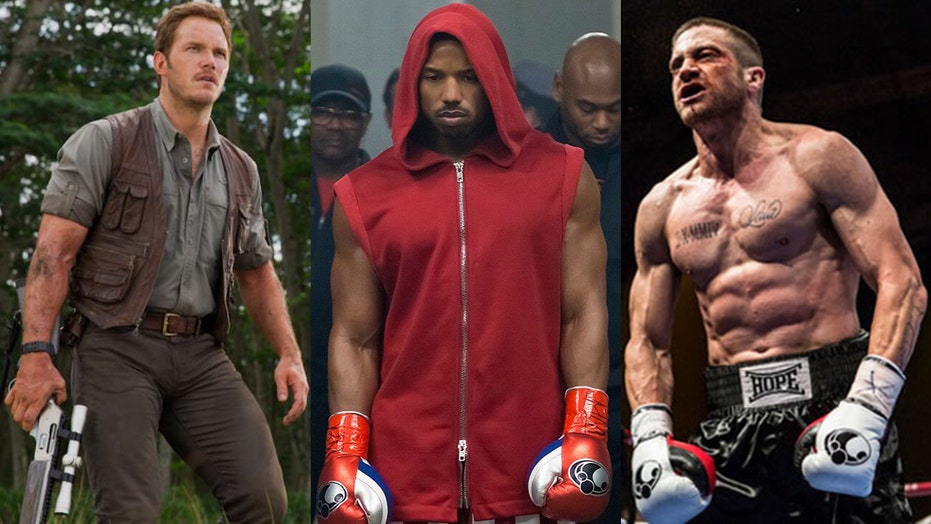 Committing to becoming a Hollywood actor is difficult.

As a performer, you’re often tasked with cutting weight depending on what any given role might require, but having to pack on pounds in the form of raw, unadulterated muscle is a challenge only reserved for the most dedicated performers.

While many actors have accepted the call and haven’t looked back, bulking up for acting gigs isn’t for the faint of heart.

Here are 11 of your favorite actors who've done insane transformations -- all in the name of looking good on the big screen.

Chris Pratt is pictured here at the 'Avengers: Endgame' premiere on April 22, 2019 in Los Angeles, Calif.  (Axelle/Bauer-Griffin/FilmMagic via Getty Images)

Although Pratt, 40, was mainly knowns for his role in “Parks and Recreation,” the funnyman lost 60 lbs. in six months on the way to shredding his body for his part in Marvel’s “Guardians of the Galaxy.”

Even before that, for a gig in the 2012 film “Zero Dark Thirty,” Pratt told People he did 500 push-ups a day and ran five miles a day to get himself into top shaped to play a Navy SEAL. Still, when "Jurassic World" premiered in 2015, Pratt maintained his pumped look and shows no signs of turning back.

In this Nov. 28, 2018, file photo, actor Michael B. Jordan poses for photographers upon arrival at the premiere of the film 'Creed II', in London.  (Vianney Le Caer/Invision/AP, File)

However, in 2015 Jordan turned himself into a punching machine when he bulked up for the film “Creed,” transforming his body into one that graced the cover of Men’s Fitness in December 2015.

Chris Hemsworth arrives at the premiere of 'Avengers: Endgame' at the Los Angeles Convention Center on Monday, April 22, 2019. (Photo by Jordan Strauss/Invision/AP)

In fact, the 36-year-old put on so much muscle at the time that he didn’t fit into any of the costumes that had been created for him.

CHRIS HEMSWORTH'S WORKOUT WAS SO INTENSE, HIS SHIRT 'BURST INTO FLAMES'

Nanjiani, 42, nearly broke the Internet when he shared an image of himself to his Instagram looking absolutely shredded. The actor enlisted trainer Grant Roberts to bulk up for his starring role in Marvel’s “Eternals” and worked with Roberts as well as nutritionist David Higgins “almost every day” in order to achieve his chiseled frame.

“When I saw that reaction [on social media] was when I was like, ‘OK, I clearly don’t see what’s actually there.’ It’s something I’m trying to be aware of and be better at because that’s not a good way to be. You want to be easy on yourself," Nanjiani told Men's Health of reading the comments section.

HUGH JACKMAN REACTS TO KUMAIL NANJIANI'S TRANSFORMATION INTO WOLVERINE: 'THAT IS SO COOL'

Nanjiani's wife, Emily V. Gordon, said her DMs blew up with reactions to his new body, which was both exciting and confusing.

“Half the messages I got that day were from people being like, ‘Hey, I want to have sex with your husband,' and the other half were from people making sure I was okay with my husband’s naked body being everywhere," she described. "It took a very private thing from our lives and made it incredibly public. And all I could be was really proud, because he looked amazing.”

American actor Jake Gyllenhaal poses during a photo call for the film "Zodiac," at the 60th International film festival in Cannes, southern France, on Thursday, May 17, 2007. (AP Photo/Francois Mori) (AP)

Gyllenhaal, 39, gained some 30 lbs., half of it in muscle, for his starring role as a world-champion boxer in the 2015 movie “Southpaw.”

Gyllenhaal played Billy “The Great” Hope and achieved his physique by eating ferociously and working out as if it was his sole income-driver and after two months, went from working out three times a day to working out six hours a day in circuits consisting of boxing regiments, cardio and conditioning.

Jake Gyllenhaal lost 30 pounds for his role in 'Nightcrawler,' only to beef up in a big way for his upcoming boxer movie 'Southpaw.' (Weinstein Company)

“The amount of time you have to put into it, the sacrifice that you put into your body, it’s not something that you’re eager to do again. It’s a huge commitment,” he told People at the time.

To push himself into shape for the Marvel flick “Ant-Man,” Rudd, 50, told People that his workouts centered on mobility and included “flips and rolls and all that kind of stuff.”

This image released by Marvel Studios shows Evangeline Lilly, left, and Paul Rudd in a scene from 'Ant-Man and the Wasp.' (Disney/Marvel Studios via AP, File)

He told the outlet he had never “exercised harder than this for an extended amount of time” and said he did it by ushering a blueprint set forth by a close pal of his.

“I took the Chris Pratt approach to training for an action movie,” he teased. “Eliminate anything fun for a year and then you can play a hero.”

Hardy, 42, played Bane in “The Dark Knight Rises” and also played an MMA fighter in “Warrior." However, his slew of body transformations has appeared to stick as of late, especially when including his role in “Venom” in 2018.

To land his Bane look, Hardy trained four times a day and added 30 lbs. of muscle and mass to his frame which translated to huge gains for Hardy in the strength column.

“I think you pay the price with any drastic physical changes,” Hardy told The Daily Beast at the time.

Tom Hardy is seen in costume as Bane on the set of 'The Dark Knight Rises' on location on Wall Street on November 5, 2011 in New York City.  (Marcel Thomas/FilmMagic via Getty Images)

He continued: “It was alright when I was younger … but I think as you get into your 40s you have to be more mindful of the rapid training, packing on a lot of weight and getting physical, and then not having enough time to keep training because you’re busy filming, so your body is swimming in two different directions at the same time. … I haven’t damaged my body, but I’m certainly a bit achier than I used to be!

"I certainly have joints that click that probably shouldn’t click, you know what I mean? And carrying my children is a little bit harder than it used to be—but don’t tell them!” Hardy admitted.

Very few actors have transformed their bodies more than Bale, 46, has in dropping massive weight and immediately putting it back on for the next role.

CHRISTIAN BALE FELT 'LIKE A BULLFROG' TRANSFORMING INTO DICK CHENEY

Bale achieved such a feat when he went from 180 lbs. down to 120 for “The Machinist” and bulked up again to play Batman in “The Dark Knight.”

Christian Bale rides a very custom chopper as Batman in a scene from 'The Dark Knight.' (Warner Bros.)

In doing so, Bale said he had to essentially train his body to want to eat after his metabolism was nonexistent and thanks to intense weight training, martial arts and plyometric circuit training, Bale bulked back up to 220 pounds and assumed the role of the Caped Crusader.

For his role as a Navy SEAL, Krasinski combined upper-body workouts with his core finishers and told Men’s Health that he became thrilled with “getting stronger every day.”

Evans, 38, morphed himself into Marvel’s “Captain America” and completely opened the world’s eyes to the possibilities of self-transformation.

Chris Evans is seen as Captain America/Steve Rogers, in the film, 'Avengers: Age Of Ultron.'  (Jay Maidment/Disney/Marvel via AP, File)

Evans found himself at the gym four to five days a week for two hours over the course of three months in order to achieve his maximum Steve Rogers look.

In an interview with Extra at the time of the film’s release, he called the workouts “brutal.”

Jackman, 51, has been jacked since he appeared in the first of nine “X-Men” films to date.

First cast as Wolverine, Jackman bulked up in a huge way to play the self-healing mutant and has since leaned out and bulked back up as he’s navigated his character’s cinematic life.

HUGH JACKMAN SAYS CRITICISM EARLY IN HIS CAREER BECAME 'AN ASSET': 'I STUCK IN THERE LONG ENOUGH'

Through other films like the 2011 robot fight drama, "Real Steel," the former sexiest man alive maintained his pumped look as he controlled the battling bot with just his movements.